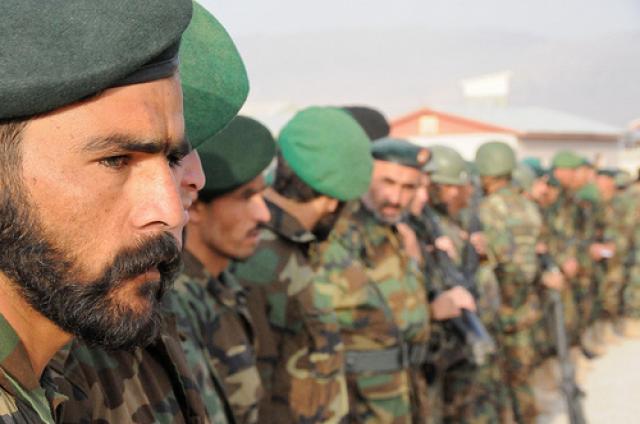 As Afghan forces prepare to take over from international troops, some residents of the troubled southern province of Helmand worry that they are not yet up to the job.

After some areas including Helmand’s main town Lashkar Gah were transferred to Afghan control in July 2011, the second phase of the handover began on December 26. This covers three more districts of Helmand – Marja, Nad Ali and Nawa – as well as Balkh, Daikondi, Takhar and Samangan provinces in the north, Nimroz in the southwest, major towns including Jalalabad, Sheberghan, Faizabad, Ghazni and Maidan Shahr, and Kabul province.

(See Mixed Feelings Over Helmand Handover on the July handover in Lashkar Gah.)

Although Helmand no longer suffers from the kind of intense fighting that was common three years ago, residents say security is not well enough established for the handover to be a success.

They say that after Lashkar Gah was handed over, it was hit by a number of suicide attacks, so the withdrawal of foreign troops from rural districts is likely to allow the Taleban to move back into areas from which they were partly or wholly expelled.

Lashkar Gah resident Abdul Hadi said the handover was a good thing but had come too soon for Helmand, where the Taleban were fully in control of some areas while the government only held major urban centres in others.

“If the process of transition is to take place now, it will certainly entail bloodshed among Helmand’s people,” Abdul Hadi said. “At a time like this, I think that handing over security would be a big betrayal.”

Saleh Mohammad, from the Nad Ali district, said that since Afghan security forces had not managed to impose security while foreign troops were still in Helmand, they would never do so without them.

“I think that once the transition process is completed, warfare will intensify in Helmand,” he said. “It’s true that the Afghan police and army are better trained than in the past, but they aren’t equipped with the weapons and artillery they need to prevent Taleban attacks.”

Mohammad Laiq Sarferaz, who served as an officer in the Soviet-backed military of the 1980s, said the current Afghan National Army, ANA, and Afghan National Police, ANP, were not as committed as their insurgent opponents.

“These forces are divided into [ethnic and factional] groups, and…, they put their personal and group interests first, which are not necessarily those of the country or the nation,” he said. “Another important point is that these forces don’t have the same motive for fighting as the Taleban have.”

While the insurgents believed in pursuing war for their faith and for a free Afghanistan, Sarferaz said, government forces were still unclear about what they were fighting for. “If the armed forces aren’t given a clear explanation of what patriotism and the aims of the war are, they won’t be able to maintain security,” he added.

Matiullah, originally from Marja, says the prospect of a security handover in his district has not convinced him to leave the safety of Lashkar Gah and go back home. Like many in Helmand, he has little confidence in ANA and ANP personnel brought in from elsewhere. A locally-recruited auxiliary police force was also operating in Marja, but would not cope on its own, he said.

“Thousands of national and international forces carried out an operation in Marja district, which took months and gained international notoriety. Despite this, security was not imposed very well in Marja. If foreign forces leave the district, how will these thieving police and army men be able to halt the Taleban? We don’t trust these armed forces. Even before the Taleban came, they [government forces] used to loot us – they are marijuana users, intoxicated people.”

Low morale has resulted in high desertion rates in the government’s security forces.

“We don’t know who our friends and enemies are,” an ANA officer who deserted two months ago told IWPR, speaking on condition of anonymity. “One day our president says the Taleban.… are our enemies, and the next he calls them our brothers. The Americans view the Taleban as their enemies one day, yet they have started underground talks with them and say they aren’t their enemies.

Government and defence officials deny that the military lacks resolve or direction.

According to Helmand governor Mohammad Gulab Mangal, “When responsibility for security in Lashkar Gah was handed over to Afghan forces, people were concerned and mistrustful about whether security would be maintained in the city. And at the same time, our opponents tried to stir up chaos to demonstrate that the transition had been a failure. However, our brave Afghan forces were able to prevent any type of incidents.”

With proper training and equipment in place, Mangal said, “We are ready to deal with any kind of security issue. We want to reassure the public that no problems will arise.”

Both the defence and interior ministry have recently intensified their recruitment processes. Defence Ministry spokesman Zahir Azimi says ANA numbers now stand at 180,000 and will reach 195,000 by October 2012. Defence ministry staff say the ANA should expand to 240,000 by the end of 2014, when international troops are scheduled to leave Afghanistan.

General Shirshah, commander of the ANA’s Maiwand Corps, acknowledged that army units in the province did not have all the weapons they needed, but insisted this would not hinder the security handover.

“We have a very good plan in place in Helmand, and coordination among the ANA, ANP and Afghan National Security Directorate is excellent. We can take over responsibility for security from the foreign forces, and I would like to assure people that there won’t be any problems – we are going to do better,” he said.

Helmand’s police chief Mohammad Hakim Angar added, “I can give an assurance that people should not worry, as our forces are very strong and are capable of maintaining security in this area.”

Gol Ahmad Ehsan is an IWPR-trained reporter in Helmand.