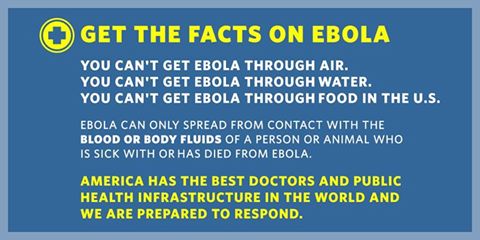 White House message on Facebook, indicating that “YOU CAN’T GET EBOLA THROUGH THE AIR.” Research we uncovered indicates otherwise. CDC refuses to comment?

The White House issued a statement about the Ebola virus on October 12, 2014 which claims that the virus cannot be transmitted by the air. Well not exactly, it would seem. t least there is some doubt out there among the various experts.

“Dr. C.J. Peters, who fought a 1989 outbreak affecting research monkeys in Virginia and continues to gather more helpful details about the virus said that ‘unqualified assurances that Ebola is not spread through the air are misleading’ and that the possibility of Ebola evolving into an airborne virus should be taken into account.

Virologist, Dr. Philip K. Russell who led the Ebola research in the U.S. Army’s Medical Research and Development Command, is on Peters’s side. The fact that many things about the disease are still unknown is something to consider.”

There are also conflicting report on how a first confirmed victim of Ebola in the US was infected by the virus if not by air.

It is the first case of Ebola transmission in the United States. The victim a Texas nurse who treated an Ebola-stricken Liberian man has tested positive for the deadly virus.

“The diagnosis was confirmed Sunday by the Centers for Disease Control and Prevention, four days after the death of Ebola patient Thomas Eric Duncan in Dallas.

Thomas Frieden, director of the CDC, said that an unknown breach in protocol led to the Texas Health Presbyterian Hospital worker being infected and that federal officials are investigating…”

In addition a friend sent me a report indicating that in one case Ebola was transmitted via air from a monkey to a pig in 2012.

“The public is being told by health officials that the virus that causes Ebola cannot be transmitted through the air and can only be spread through direct contact with bodily fluids – blood, sweat, vomit, feces, urine, saliva or semen – of an infected person who is showing symptoms.

However, several leading Ebola researchers claim that the virus mutating and spreading through the air should not be ruled out”

Note: We tried to contact the CDC in Atlanta for comment on this breaking story – officials there refused that request?

Filed under: Healthcare, News
Share Tweet Pin G Plus Email
previous article: White House issues public policy statment on Ebola response
next article: 20 children have been killed in bombings in Ukraine – US backed Kiev government to blame for this atrocity