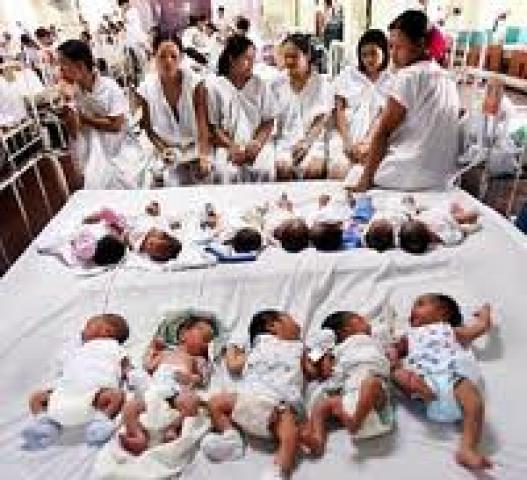 Angela Michelle a friend of mine wrote an article a while ago on the topic Nature vs. Nurture, a very interesting topic I thought.

Half way through this article a question was posed.

“Do you think that a colony of only babies, having no human adult communication whatsoever, would be able to create a form of communication, so that all the babies could understand each other?”

I pondered this question for quite a while then I asked God his opinion. After about 5 minutes thinking it over I came up with the following conclusion.

I was contacted a few days later by another writer and asked to created an article explaining my answer of “Yes” as I only gave a very brief comment. Here is the article as requested.

Please keep in mind that as I am a “Christian” I will apply Biblical Scriptural verse reference to substantiate my position, as well as applying simple observations and logic in my article.

Let us all be reminded that there was a time when all mankind spoke the same language as ther was none other, until God himself confounded those erecting the tower of Babel and strew the people all over the place. (See Genesis: 11: 7-9 in the bible)

Permit me to make this point. In the life of a baby, from first being expelled from the womb, we are waiting to hear, the baby’s first cry, as it expels its first deep breath, announcing its arrival.

That is baby’s very first attempt of communicating, outside the womb, although, it has been in a form of communication with mom, for several months, through various movements.

Yet as it enters the outside world, neither hospital staff nor mom or dad has a clue what baby is saying.

Let me now draw your attention, to the fact that within minutes, both mother and baby, enter into a form of communication, with mom speaking “Baby talk” and baby speaking “Babyese” whereby mom begins to learn and understand when baby needs food, or changing, or burping, or cuddling, bathing, or playing.

Then we get into a combination of “Babyese” mixed with a test of wills, as baby tests its parents, to see what sort of response if any, baby can receive by crying and or temper tantrums, or giggling and laughing etc.

Suddenly around ages one, one-and-a half, or the terrible two’s, baby is speaking words, and forming simple communications maybe even a sentence.

Baby is up and about, walking and running throughout the home, testing both its strength, as well as trying to see how far it can get, as well as what it can get away with. “Time to learn about the stove”.

The child can recognize different colours and animals in books, as well the child is also able to recognize many different things,cats, dogs, birdies, elephants etc.

The child is now at the age that it can not only think and do for itself, but also carry a simplified conversation, usually asking a thousand and one questions as it learns.

The Book of Genesis:

Simple by a standard recognizable form of communication. Maybe God used telepathy, but Adam and Eve and Cain and Abel had to speak.

CHAPTER 11 Verse 1 “And the whole earth was of one language, and of one speech.”

Now this was around the time of Noah and I don’t know how many thousands or millions of people were on the face of the earth at this time, because the Bible is not really explicit about the numbers, but the Bible does say that all of the people spoke one language, so definitely some how in some way, a universal form of communication developed, so that all the inhabitants could speak together and be understood.

Therefore, Yes of course, a colony of babies, could and would be able to, with time form a universal form of communication so that each one could understand the other.

Now I wish to give you all something to think about.

In PROVERBS: 30: 25-31 “The Ants are a people not strong, yet they prepare their meat in summer. The colonies are but a feeble folk, yet make their houses in rocks. The locusts have no king yet go forth all of them by bands; The spider taketh hold with her hands, and is in the king’s palaces. There are three things which go well, yea four, are comely in going: A lion which is strongest amongst the beast, and turneth not away from any; A greyhound; an he goat also; and a king against whom there is no rising up.

Taking my premis one step further, God says “Ants are people” therefore they would have some language, some form of communication.

The same goes for each and every insect and animal no matter its size. All are able to communicate with their own species, and quite possibly one form with the other.

All of the animals, all of the insects, according to the Bible, Our Lord, Our God, recognizes as though inferior to man worthy to be considered as people.

This being the case if true, how should we be applying the Fifth Commandment? “Thou shall not kill.”

Since the Holy Bible cannot be held in error, for it is God’s Holy Word, and since it is God himself,  speaking this in Proverbs, also since God is incapable of lying, the scripture in PROVERBS 30:, must be fact and truth.