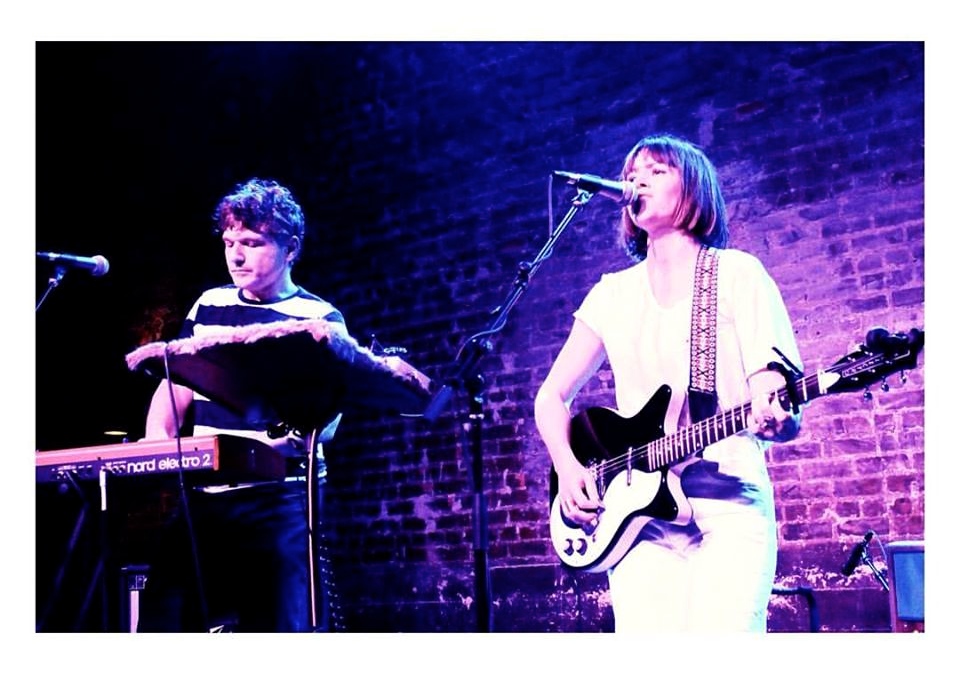 Last Sunday Dean Vivirito and Lexie Helgerson, the duo behind the indie-pop project Who Can Sleep, premiered their summery bright tune “Falling Down” at The Hi Hat in Los Angeles, CA.

Watching them perform, your heart fills up with warmth and happiness. Their songs are full of incredible sincerity and you can feel the harmony in every bit.

Despite being surrounded by fans Dean Vivirito and Lexie Helgerson were willing to answer few questions.

Katia Rekho: What inspired you to write that song?

Who Can Sleep: It was a Saturday last November. We’d been in the house all day and decided to walk down to Glendale Boulevard (our main street in Atwater Village). Dean’s always looking at the sky, and loves to tell me about aliens. Walking back home an hour later, we did see something in the sky that we did think were aliens. I was actually terrified and excited all at once. There was this huge mushroom of light, so close to the earth, like nothing I’d ever seen. And then it disappeared. We got home and looked online and found nothing. And I wrote the song. Dean produced it.

Rekho: How did you meet, if I may ask, and how did you become a band?

WCS: We met singing at El Cid shortly after I (Lexie Helgerson) moved to LA, 2.5 years ago. Dean Vivirito was there playing a set to promote a record he’d made. His set opened for an Open Mic. I was there, on a whim, for the Open Mic. It was my first, so it’s probably a good thing that he was at the bar outside when I got on stage. We worked separately for some time, not wanting to cross the line of being romantic AND musical partners. But last November we kinda sorta accidentally wrote a song together. I remember we looked up at each other like, uh-oh, did we just do that? The songs just kept coming, and a few months later, we were “Who Can Sleep”.

Rekho: When are you planning to release your first album?

WCS: We’re working on an EP of four or five songs, which we’d like to release by September. Also, now you can find our music on iTunes and Bandcamp.

Rekho: What would you say is the biggest challenge for a new band to become established in Los Angeles?

WCS: Depends on what you mean by established. I think patience is big part of anything one does. Also, as artists, it’s important to remember that we play a valuable role in society in that we can help and inspire others.

Dean just shared with me this open letter that Wayner Shorter and Herbie Hancock wrote to the next generation of artists. I wish everyone would read this letter. I think the challenge is more to live compassionately and courageously, to be open to others and the world around us, and to really appreciate what others bring to the table. The rest will fall in line.

P.S. Soon Who Can Sleep will go on a tour, you can check tour schedule on their official website.