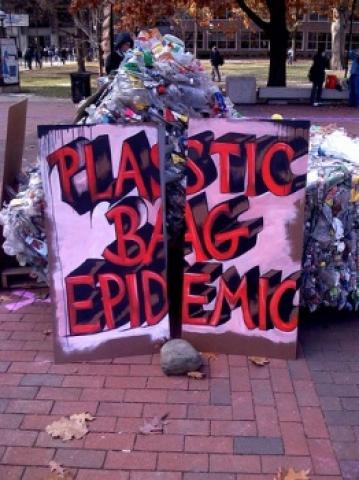 At food stalls and in supermarkets in Chiang Mai, Thailand’s second largest city, plastics of all shapes and sizes are dolled out like confetti when you make a purchase of items. The fascination with plastic is so amazing that with a single purchase of several items you can end up with over five plastic bags when less could do.

What is surprising is the plastic bags come at no cost, so customers gladly accept the packaging.

There is no doubt that the plastic bags which are probably handed out in their millions throughout Chiang Mai, and other parts of Thailand come at a great cost to the environment.

In Thailand, as in many parts of the world, the use of plastics is at epidemic levels with serious consequences for the environment. According to www.reusable.com, a website that promotes fighting the massive over-consumption of plastic shopping bags, the world has consumed over 276 billion plastics this year and the number is rising by the second.

Kicking the addiction to plastic bags is one of the single most important positive things that individuals can do to both protect and keep the environment clean. But it appears that it will take the world a long time to rid itself of the plastic habit because there are too many financial interests vested into the continued production of plastic.

According to statistics, between 500 billion and a trillion plastic bags are consumed worldwide each year. Of those, millions end up in the litter stream outside of landfills – estimates range from less than one to three percent of the bags. This is because plastics bags have a short term lifetime of use, and end up being thrown away.

Plastic is particularly terrible for the environment because it takes months to hundreds of years for plastic bags to breakdown, and in the process of decomposition plastic leave behind toxins which eventually pollute the soil and water sources. Research shows that in the absence of proper recycling, plastics will take 1,000 years to decomposed.

“Plastic bag litter has become such an environmental nuisance and eyesore that Ireland, Taiwan, South Africa, Australia, and Bangladesh have heavily taxed the totes or banned their use outright,” reports the National Geographic.

Making people pay for the use of plastic can help to bring a sense of responsibility to their use. There is a need to put in place measures that can make people directly conscious of the consequences of their actions to the environment.

In Thailand, as in many parts of the world, social awareness campaigns that encourage individuals to re-use plastic bags can significantly reduce the damage to the environment.

As www.reusable.com notes, thrusting the plastic bag issue into mainstream consciousness while promoting the wisdom of reusable shopping bags is an important part of the solution.