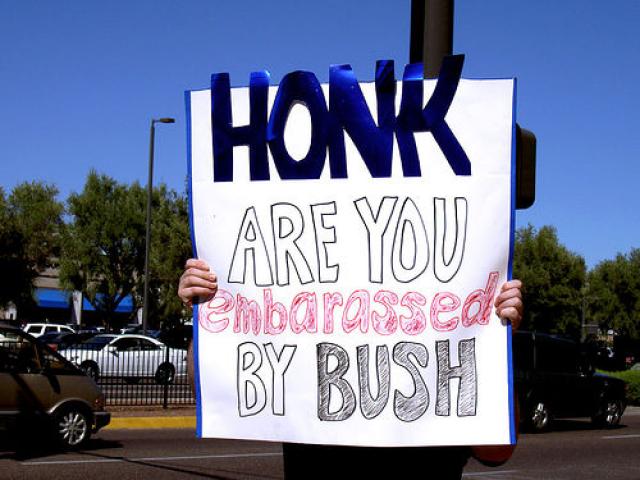 It’s not easy spending $3 trillion. I tried (see below). But then again I wasn’t buying a quagmire in the Middle East. That price tag—$3 trillion—is what the Bush administration is spending on the war in Iraq, says Nobel Prize-winning economist Joseph Stiglitz.

The checks paid for with our taxpayers’ dollars that Bush is writing for the war means other checks are not in the mail—not for health care, rebuilding New Orleans or the nation’s infrastructure, education, job training, or maybe even lending a hand to homeowners trapped in the foreclosure crisis.

Just what would $3 trillion buy? It’s hard to imagine. Even though most of us will never see $1 million, we’ve got some idea just how much money that is and what it will buy.

The folks at Brave New Films, the Center for Corporate Policy, the True Majority and other progressive groups are giving you a chance to see just how much $3 trillion will buy and to find out if you can spend it better than President Bush.

Just counting the zeroes on the $3 trillion price tag of the Iraq War is enough to induce hyperventilation. But what does $3 trillion really mean? It’s difficult even to comprehend a number that big. Well, try filling your shopping cart with what the cost of the Iraq War could buy: health care for every American? A new home for every subprime borrower now facing foreclosure? An Ivy League university? You haven’t even gotten started.

The $3 Trillion Shopping Spree website looks like any other online shopping mall, with departments ranging from apparel and shoes to health and beauty and tools and industrial items. It’s chock full of goodies, including ending our dependence on foreign oil for $500 billion and a new national power grid for just $300 million.

Here’s how Bush’s $3 trillion spending spree breaks down, according to Stiglitz:

Want a scary thought? Republican presidential candidate Sen. John McCain (R-Ariz.) has said he could see a foreign policy that would keep us in Iraq for 100 years. Of course that’s not the foreign policy either Sen. Hillary Rodham Clinton (D-N.Y.) or Sen. Barack Obama(D-Ill.) would pursue.

I only got to $210 billion before the boss came by—and you know how bosses get when they see you surfing on company time. But that measly $210 billion got a lot.

Having $3 trillion to spend makes it easy to be generous, so the first items I put in my shopping cart was the complete rebuilding of areas devastated by Hurricane Katrina—which I guess the Bush administration has been too short on cash to accomplish—and buy a brand-new national power grid. That money is well spent and also creates many much-needed jobs. I also spent some $10 billion to buy 10 million kids new clothes, shoes, coats and school supplies.

It’s amazing what $3 trillion can buy. I still had mega-bucks to spend. So I decided to solve a few of the world’s problems. I bought several desalinization plants to address Africa’s drought and water crises and funded a global effort to teach sustainable agriculture worldwide. Time to slip in a few goodies for myself: I selected the five-disc, complete collector’s edition—Blu-ray—of “Blade Runner,” along with a six-pack of athletic socks and an old pick-up truck complete with manual transmission and a happy dog. But before I could solve the rest of the world’s problems, the boss wanted to know when this blog would be completed—and I still had $2.79 trillion to go.