Travelers who have been in contact with Ebola patients in West Africa necessarily underwent quarantine upon their arrival in the US states of New York and New Jersey. The decision of state governors intervened Friday, October 24, the day after the announcement of the contamination of a doctor in New York. The latter was recently returned from a mission with Doctors Without Borders in Guinea, one of the three most affected by the virus.

“A self-quarantine is not enough,” the governor of New York, Andrew Cuomo, said Friday to justify this measure. “This is too serious a public health concern,” he added during a press conference. The New Jersey governor, Chris Christie, cited the example of a woman who arrived Friday after caring for Ebola patients in West Africa that would be subject to a 21 day quarantine order.

These provisions go further than the federal guidelines due to the first diagnosis of hemorrhagic fever laid in New York on Thursday. Previously, only the state of Texas had been hit by the virus. A contaminated Liberia man is dead and two nurses who had treated him had contracted the virus on contact and have both been declared cured on Friday. One of them, Nina Pham, left the hospital. In a highly symbolic gesture, she was received in the afternoon at the White House by President Barack Obama, who hugged her. 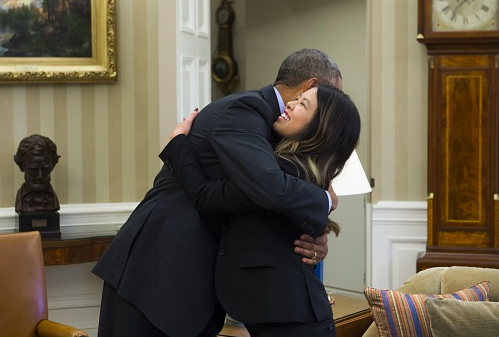 The news of the doctor hospitalized at Bellevue Hospital in Manhattan was reassuring. “Craig Spencer is in a steady state and is able to speak”, said the manager of health services of the city, Mary Bassett.

“All our infection control procedures were perfectly placed,” she said. Craig Spencer went to the hospital immediately after discovering that he had a fever; it was 100.22°F, not the originally indicated 102.92°F.

New York authorities have carefully reconstructed his schedule in order to identify which meetings and places he visited in the city of 8.4 million inhabitants.

The Governor of the State of New York has begun to make concessions on the issue of systematic investment quarantine travelers returning from countries affected by the outbreak of Ebola. Those affected will eventually be glad to stay home in isolation rather than in the hospital, as mentioned in a statement from Sunday, Oct. 26.

This course of action was also established in the states of New Jersey and Illinois, taken on Friday after the announcement of the contamination in New York of a doctor returning from Guinea, has been strongly criticized in the course of the weekend.  Some are calling him a criminal. The animosity first came from Kaci Hickox, the first traveler who had endured quarantine procedures in New Jersey. The nurse back from Sierra Leone and was blasted Saturday, and suffered being interrogated for several hours “like a criminal” when she arrived in the US before being taken to hospital.

“I do not want anyone in that situation and I fear for people who will be in my place in the future,” she added. Tests conducted on her for Ebola have so far been negative. “The United States should treat people returning with dignity and humanity,” she concludes.

“The best way to protect ourselves is to end the epidemic in Africa, and the best way to fight the disease there is to send the maximum of health personnel on hand to help treat the sick,” reminded the director of the American Institute of allergy and Infectious diseases, Dr. Anthony Fauci, on CNN.

“When they come back, they should be treated in a way that does not discourage them from returning there,” he added. Scientific evidence shows that people who are not sick, who do not have symptoms when they’ve had no contact with their body fluids do not pose a threat and will not spread the disease,” he insisted, though Washington disapproved.

Criticisms from officials shared from the White House, according to the New York Times, state that these measures were “unnecessary and probably counter-productive.”

If the Governor of New York, Chris Christie, is slightly relented, he did not regret his choice to have imposed such measures, saying they “protect the health of the people in New Jersey.” According to him, this does not deter volunteers to go to Africa. He states, “I think the people who make this approach, who volunteer also understand that it is in their interest and in the interest of public health to have a 21-day quarantine. I think this will become national policy sooner or later,” from Fox News.