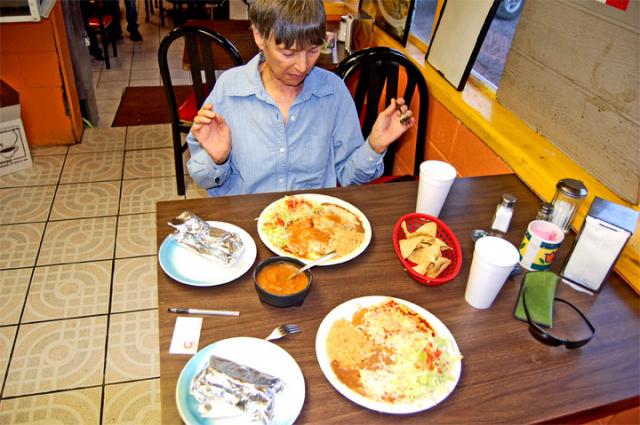 WWOOFing is a vacation, of sorts.  If your idea of vacationing is kicking back all day with your feet up on the balcony rail, sipping margaritas, eating flaming desserts, watching the latest video and falling into bed after finishing three or four cocktails, WWOOFing isn’t for you.

WWOOF stands for World Wide Opportunities on Organic Farms.  We’ve been thinking about the possibility of doing more than just thinking about the possibilities for four or five years, maybe longer.  This year we decided that we needed to get serious. Celinda searched for WWOOF on the Internet and we signed up.  Signing up amounts to paying a registration fee, receiving a book with names and descriptions of WWOOF opportunities, and you take it from there.  Hosts have the farms, which can be a backyard or thousands of acres.  Volunteers are those who do exactly that…volunteer.

WWOOF was started in the UK during the 1970s and has spread over the globe.  You choose the country you want to visit and purchase the WWOOF book for that country.  The hosts describe their farms and what they expect in return for room and board. You need to do your homework, because room and board can mean anything from a tent and some food, to your own house and all the food you can eat.  Hours are another place you need to look at closely.  Some want three or four hours a day, four to five days a week, others think that slave labor is legal.  We spent evenings going over the book with a fine toothed comb, then Celinda drafted a letter and sent it to twenty or thirty that fit our passions.  We got six or seven good replies and a couple that wanted to know “What’s in it for me?”

Being newbies at WWOOFing, we wanted to get our feet wet reasonably close to home, in case we decided it wasn’t what we thought it would be.  We contacted some in New Mexico and decided that Ruidoso was our best bet.  With the thermometer reaching new undiscovered territory a couple of times in the desert where we live, going to the mountains had a lot of appeal.

We left later than we’d planned, which is normal for us.  It seems we can go to bed with nothing on our agenda for the next day and wake up with a full schedule.  Stuff breeds during the overnight hours.

By the time we made a couple of stops, found our destination after wandering around for awhile, met the host and settled in, it was too late to cook, or at least that was an excuse acceptable to both of us.  Our host recommended the “Disco Taco.”  The name came from Mexico where they cooked their tortillas on old discs that are used in farming to turn the earth.  Our host told us to disregard the outside appearance because, according to him, there was lots of food, it was authentic Mexican and it was excellent.  I have photos to prove the first two and I wouldn’t lie about the third.

After dinner we went back to our private room, had a good night’s sleep and were ready to begin weeding, mulching and watering the next morning.  I took a lot of before and after pictures and we were all proud and happy with the first day’s results.

That evening we had dinner with our hosts, their three dogs and Leon the cat.  Their five month old son was asleep in his room by dinner time.  It was a sumptuous meal with stimulating conversation, swapping of ideas and experiences about living light on the earth, and organic farming.  They have about eight acres, which doesn’t seem like much until you begin practicing hi-intensity organic gardening/farming.  They want to reach a place of self-sustainability and we were glad we could be of assistance.  Day two and three were more of the same, three or four hours in the garden and the rest of the day off to explore.

I probably took a hundred or more pictures of bees and hummingbirds collecting pollen from the Red Hot Pokers that grow around the house.  There were lots of photo opportunities and I had lots of time to learn some of the things my new camera will do.  I’m barely beyond point and shoot with the new camera, but I’ll have opportunities this summer to learn more.

We’ll be visiting other organic farms off and on this summer, and have a website www.smalltownswest.com that will chronicle our experiences in small towns and on organic farms.  There will be lots of pictures and text from both his and her points of view.

Filed under: Lifestyle
Share Tweet Pin G Plus Email
previous article: Hillary Lost, What Path Does Bill Take Afterwards?
next article: While Gay-Marriage Is Legal In California, Not Everybody Is ‘Receptive’