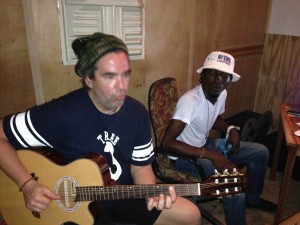 Award-winning Canadian musician, Ed Roman has released the music video for his latest single, “Jamaica.”  The video/short film was shot during Ed’s recent visit to Oracabessa, where Ed and his wife delivered a shipment of humanitarian aid items.  Clocking in at more than 5 minutes, the video release mixes music video and documentary-style footage of local musicians, dancers, artists and performers from the island, as well as a mimed performance from Ed.  Parts of the video were shot just around the corner from where Bob Marley was born, grew up and is now buried, known as Nine Mile.  Watch the inspiring video for “Jamaica” at https://www.youtube.com/watch?v=caBbTg-kkdA.

Ed Roman says, “Jamaica is one of those places that you cannot help but feel great oppression, see the extreme poverty but at the same time the incredible ingenuity, artistic ability and cultural connectedness that we as the Western civilization have lost a great deal of. If you say you have been to Jamaica and you spent time in a resort you really actually haven’t visited the country at all.’ 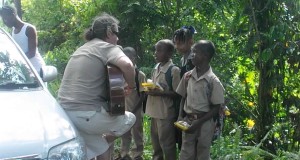 “Our trip to Oracabessa was not only a well-founded vacation after two years of hard work but it also gave us the opportunity to spread our wings and share with friends and family; as we are godparents to a child there. We also in some cases time the arrival of three shipping barrels filled with food, clothing, multiple necessities from tools to kitchen implements and gardening implements. Not to mention a great deal of things for the kids that the readily need like paper, books, pens, and many different school supplies that will go a long way to help them through their school year. We have sometimes had people generously donate similar kinds of things that we in turn send down to friends and family that are in dire need of these kinds of things. It was nice to be able to be with everybody to open the shipping barrels and take comfort in knowing that people would be secure for some time to come.’

“Much of the time when I’m there I spend walking around playing music to people all over the place. From the streets of Kingston to the jungles of St. Mary and St. Ann’s sharing my music is paramount for me; as musicians on the island who are very good at what they do are greatly welcomed into many scenarios that really uplifts my existence as a human being. I wish more people felt this way about musicians around the world. I also have bought a guitar every time I go, and as I played it and sing songs to people I also spent a great deal of time teaching young kids; I want them to learn anything that they can about music.’ 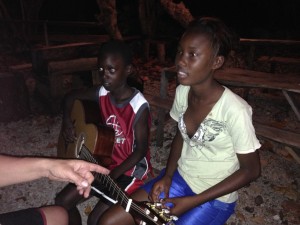 “Jamaica is a place not yet inundated with an overwhelming amount of technology and a guitar, as it was to me as a child, is like a weapon and the greatest form of technology any kid can get their hands on. As the weeks pass I started to realize there’s a certain kid that will deserve this guitar and near the end of our visit I hand the guitar to the child to let them know it is now theirs and what I  have shown them, they can show others. Whatever they can learn from other people and show other kids their own age is now his or her mantra. I always inform the child, and tell them it is a challenge, that I will invariably be back to check out their progress.’

“There is also a great man they call Mr. James that is a potter, good friend, community leader and minister to his church on the rock The Little Rock African Methodist Episcopalian Zion Church. My wife Kim spends a great deal of time collecting old pottery tools, glaze, and a multitude of other things that go a long way to help Mr. James create his pottery that he sells on the beach to help make money for the people in his community.’ 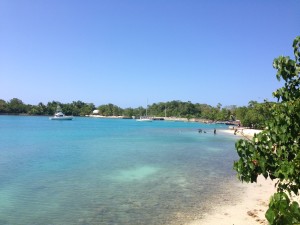 “Jamaica is one of those places that is hard not to get involved. It boasts some of the most incredible musicians from our past and present like Bob Marley and the Chronixx, Jamaican culture oozes mystique and electricity that is unparalleled by most, it has beauty that is overwhelming everywhere you go from the simplicity of lifestyle to the incredible vegetation and horticulture all over this rock. Without sounding selfish Jamaica is one of those places which makes me feel human again. It allows me to live my life really without the constraints and technical lifestyle that I’ve been forced into in the Western Hemisphere or the quote unquote Babylon as Rasta culture tends to call it. There’s something sublime, erotic, alarming and ambrosia like about this beautiful place and my heart goes out to all the people of Jamaica for fighting the good fight and continuing on with their lives despite what happens to them. Jamaica, you made me stronger than I ever thought I could be. Thank you.” 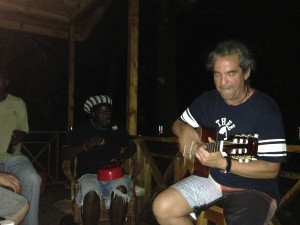 Ed Roman is an Award-winning singer/songwriter, performer and multi-instrumentalist from Shelburne, Ontario, Canada.  Blurring the lines between pop, rock, folk, and country music genres, Ed’s uniquely crafted songs have received regular rotation on more than 100 terrestrial radio stations across North America.  Ed is a 2014 Artists Music Guild Award Nominee and a 2014 Artists In Music Award Nominee.  He is also a 2014 International Music and Entertainment Association Award Winner and a two-time Indie Music Channel Award winner. Ed has performed at the Red Gorilla Music Fest during SXSW, The Millennium Music Conference, and SS Cape May, and he will be touring New York City and Philly in July.  His current album, Letters From High Latitudes (an homage to his Ontario home) is a critically-acclaimed vehicle for Ed’s socio-political, earthly-conscious and globally-aware messages.  This earthy, funky and magical mix of music has earned Ed Roman airplay chart recognition and won over legions of fans around the world, known as “Ed Heads.”  http://www.edroman.net