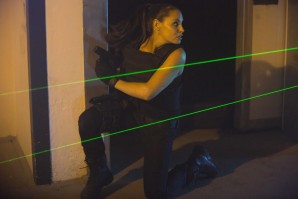 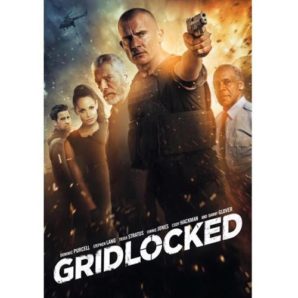 Simkin’s job for film productions is one where she is responsible for creating images out of moments from the film for various forms of print media, press, internet marketing and social media campaigns. She shoots behind the scenes photos of casts and crews, as well as for publicity and posterity. Simkin also has the important role of creating a set-up gallery for studio shoots in order to create key art for a film’s poster creation and promotional materials.

“These images must not only tell the story of the film so that anyone who looks at it will be able to infer some kind of narrative out it, and in that regard, part of my work is capturing the stills in a way that technically and narratively matching the work of the Director of Photography,” she said.

With photography for feature filmmaking, having a good eye is a necessity. It is a skill not mastered with ease and in this arena, Simkin rates among the elite.

Geoff Hart, who produced both “Gridlocked” and “Lower Bay,” said “Still photography requires a good eye. It’s not something that is easily learned. Erin has that. Her compositions, and her attention to detail are what makes her standout.” 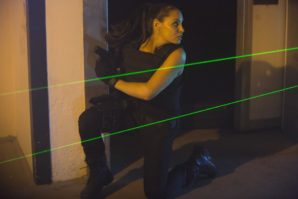 The marketing behind bankable commercial films that find distribution is indispensable to a project’s success. Simkin’s photographic contributions proved imperative and were recognized by those championing the productions. “Erin’s work has been invaluable in the online marketing, poster development, and behind the scenes components of the project,” said Hart.

Working on “Gridlocked” was Simkin’s first foray into the action genre, which required physical skills not normally called into use. Most of the film’s production took place in Etobicoke, Ontario, Canada, in an old meat packing warehouse.

“We had several intense fight scenes with guns and bullets, and that was something that I had to get used to,” said Simkin. “For example, building a cover for my lenses when debris from the bullets initially scratched my lens. Luckily it was only a filter, but I learned my lesson quite early on. With action films that feature gun play, and other SFX, not only do you have to be able to move extremely fast, you have to be constantly aware of your surroundings, all while getting the shot.” 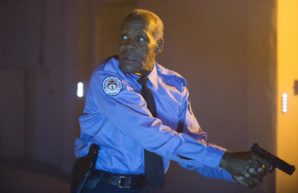 Danny Glover returns to action as Sully in “Gridlocked.”

“Working with Danny Glover was definitely one of the most memorable experiences,” Simkin said. “He was so gracious and had a great work ethic. It was so cool seeing him in action. There is one image I managed to capture of him behind the scenes, where he is reading his script in the warehouse by himself with all the movie lights surrounding him. It was a special moment for me, getting to be in the same room with someone I watched and admired as a child and catching him in the midst of his preparation was an unforgettable moment and made for a great still!” 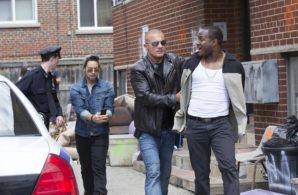 Her work on the “Gridlocked” poster yielded little time with each actor in the shoot, but after developing rapport with the actors throughout filming, Simkin knew what character traits they should portray.

“I researched different posters from other films in the genre and based on that, envisioned and executed a lighting plan that would fit into our already tight schedule,” she said. “While I was shooting Dominic Purcell, we had a great time collaborating on the vision for his portrait. Danny Glover serenaded me while I shot his images, which was super cool. These actors are so professional and know exactly what to bring to the shoot that really helped move it along fast and without any hitches.”

Meanwhile, the production for “Lower Bay” brought with it challenges as it was shot in extremely low light, sometimes with light provided only by a cell phone. The scenes in Lower Bay Station helped set the mood for the film, which had other shooting scenes in a warehouse.

The job was an opportunity for Simkin to work alongside McGowan (“Planet Terror,” “Grindhouse,” “Charmed”) and famed “Back to the Future” actor Christopher Lloyd, who is a three-time Emmy winner.

“Working with Rose was really great. She loves photography and does her own stills on her movies she directs so we had a lot in common,” Simkin said. “She really cared about still photography and would even request certain stills be shot and also gave me some unique ideas of angles to try out.”

Of Lloyd, Simkin says, “Working on a large set with Christopher Lloyd was a special moment for me. He is such an incredible actor, and watching him work, and the way he treats everyone with respect, really made me see how wonderful it could be to collaborate on a film with seasoned actors.” 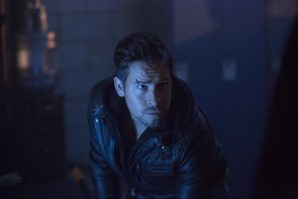 After the close of production, Hart said of Simkin’s work, “Punctuality is extremely important, and Erin was always on time and willing to accommodate during our hectic schedules. Moreover, her ability and experience to understand what the production required, and how to capture the footage in a way to make it useful for a wide variety of purposes, was invaluable.”

This year, she was the on-set photographer for writer-director Joey Klein’s romantic drama, “The Other Half,” which was nominated for a Grand Jury Award at the SXSW Film Festival, as well as the to-be-released drama, “Below Her Mouth” from director April Mullen.