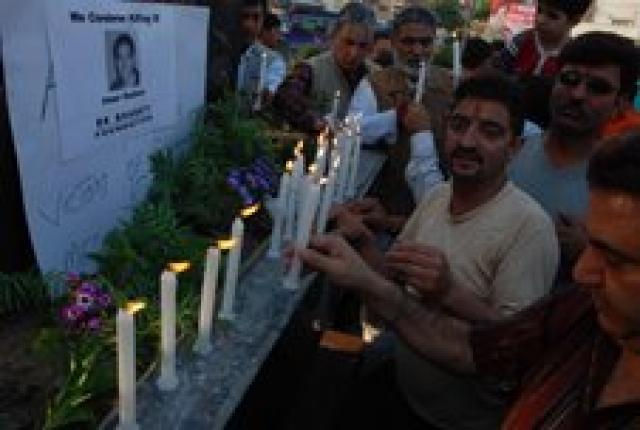 Jammu –  Massive candle light protest demonstration was organized in Jammu at Press Club against the killers of ragging victim Aman Kachroo seeking stringent punishment to the killers and enactment of legislation to curb the growing menace of ragging in the country.
Aman Kachroo who was killed by his seniors at Medical College in Himachal Pradesh a few days ago during a ragging session has drawn severe criticism by the intellectuals as well as other citizens seeking a proper legislation against the menace.
RK Bharati Foundation along with the relatives of Aman Kachroo today organized a massive candle light protest demonstration in and was joined by a large number of people and leaders of different organizations.
Citizens raised slogans against the killers and asked the Himachal Government to punish the killers besides urging the government of to bring legislation and direct all the school and college administration in the country to keep a strict tab on the menace so that many precious lives are saved.
The demonstrators started a protests rally from Press Club and Culminated near Pt Prem Nath Dogra’s statue where two minutes silence was observed for the peace to the departed soul and floral tributes were paid besides lighting candles in front of the portrait of Aman Kachroo.
King C Bharati, Chairman of the RK Bharati Foundation said that college administration was also guilty of trying to shield the crime for 36 hours and sought de-recognition of the college immediately.
King C Bharati also asked the state chief minister Omar Abdullah to intervene and pressurize the Himachal Government to ensure speedy justice to the aggrieved family as this will be a lesson to other anti-social elements to desist from such bullying of the students in future.
He said that ragging has achieved an alarming situation in the country with many brilliant students losing their life and career at the whims and fancies of a few ‘goonda’ elements.
Bharati also condemned yet another case of ragging in Andhra Pradesh in which a girl tried to commit suicide after getting humiliated at the hands of her seniors.
Prominent among those who participated in today’s protest demonstration include, ML Koul, Grand Uncle of Aman Kachroo, Bhushan Lal Bhat, Ex-MLC, Dr RL Bhat (JKVM), Sanjay Dhar, Vijay Chicken, GK Mujju, Hira Lal, Romesh Hangloo, Rakesh Tickoo, Durga Nath Hangloo and many other leaders, ladies and children.