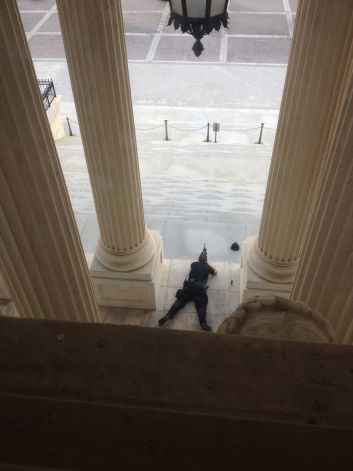 A “sniper” takes aim at the Capitol building during the lock-down last week. He is armed with a high powered rifle with optical scope. Shocking to consider that he was not being paid at the time – because of the shutdown in government. Now comes the SHIELD Act which would authorize that he “will” be paid – the uncertainty is “when” – Congress still has to figure that out.

On October 7, 2013 Rep. Fitzpatrick asked for and was granted permission to address the United States House of Representatives for five minutes regarding the Essential Law Enforcement Department Act or SHIELD Act of 2013, as it pertains to the government shutdown and threat of a default of the government debt limit.

He also indicated, something rather remarkable as well profoundly disturbing  in all this –  that during the “lock-down” of the Capitol building last week, the brave men and women assigned to protect the building complex were in fact “not being paid” at the time – shocking!

“Mr. Speaker, I rise once again this morning to thank the men and women of the Federal law enforcement community, as well as those brave soldiers, sailors, airmen and marines, for what they do to protect this great Nation both abroad and here at home. Certainly, we are thankful for them each and every day for protecting us in our Nation, but recent events again remind us of their importance.”

After the Capitol was thrown into lock-down last week, Capitol Police and other Federal officers sprang into action to protect the building and those inside. In their rush to service, I’m sure none of them thought about the fact that as we continue in a partial government shutdown that they may not be paid even though, for some, that may have been the case. While there is uncertainty about the Nation’s fiscal path in Washington, that uncertainty should never be passed along to our servicemembers and Federal law enforcement officers. The Strengthening Homeland Security, Intelligence, and Essential Law Enforcement Departments Act, or SHIELD Act, of 2013 would alleviate that doubt. This simple, bipartisan legislation that I have introduced prioritizes and protects pay for soldiers and law enforcement personnel if borrowing limits are reached or if there is an interruption in appropriations like there is right now”, he said.

“In our most difficult hours, we rely on our law enforcement officers and our military for the protection of our lives, liberty, and freedom. No servicemember or critical officer protecting the United States at home or abroad should have to worry about their paychecks in the event of a government shutdown, nor should they be used as a bargaining chip during partisan budget debates. Thankfully, during this current budget impasse, pay for our troops was secured early through a bipartisan vote, and I applaud the President for agreeing to it. However, the SHIELD Act would codify the measure into law, meaning paychecks would never again be threatened, and action would never have to be taken to protect this very basic principle”, said Rep. Fitzpatrick (source: Congressional Record http://thomas.loc.gov).