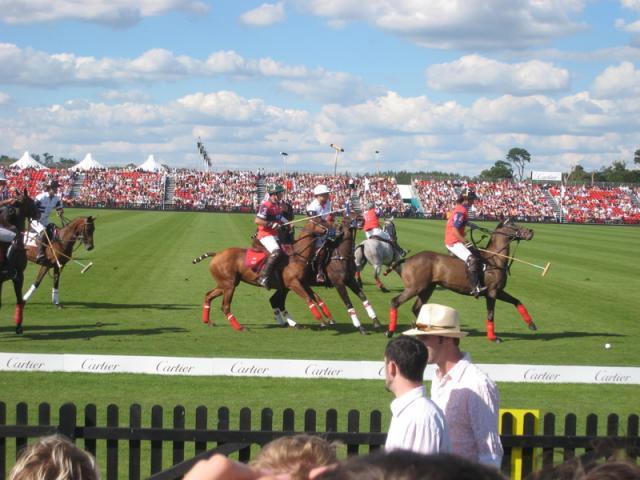 This is what the papers had to say about this particular polo outing:

The biggest polo day in the world! Royalty, celebrities and leading players combined with a 25,000 strong crowd make attending this event an experience you’ll never forget. Follow the highs and lows of the players as they gallop across the pitch, ride each other off or turn on a sixpence in pursuit of that all important goal.

This is what I had to say about this particular polo outing:

The biggest day to experience excessive debauchery! Come see countless trust-fund children revel in their glory while downing overpriced champagne and limitless Pimms bottles while dancing away under a circus-like atmosphere in the largest, most expensive outdoor party of the Summer. Follow the Brits around and witness the carnage as they vomit all over their tailored suits, pass out in public and attempt to turn all that well spent money into an excuse to get laid on the pitch.

I chose to start with the end of the night to give you a good idea of how the day went. This party was absolutely nuts. I had a friend in town from Dallas, so we were three-strong going into the day. Our journey to the actual event was memorable and worth noting: Considering the Queen’s Ground we three had to take a train out of Paddington. Turns out the station listed the wrong train and platform, so a good number of revelers including ourselves were treated to a 30 minute detour in the wrong direction. When we arrived to our despot location, a cab ride was voted on in order to get us out of the mess. Before heading out front, I bought myself bottled water, which I learned was a huge mistake. Sometime in between the 90 seconds it took me to purchase my beverage, my brother had managed to invite some girl to join us on our 30 minute cab ride to the polo fields. As I approached the tiniest cab in London, I noticed there wasn’t an inch of space to sit. As I looked in the window and noticed a solid 4.5 in what should be my seat, I looked around and noticed that none of our crew would look at me or offer an explanation as to this foul conundrum. Something even more amazing occurred when my brother yelled at me to “get in.” I’ve bird-dogged in the past, but there wasn’t any room for even my bottled water. It got even weirder when everyone got out to attempt to secure a larger cab. Baffled beyond comprehension, I finally asked, “Who the FUCK is this girl?” The situation ended with the original four of us getting back into the same cab and some talk about being a gentleman and offering a nice ugly girl a ride. Bullshit!

Finally we arrived to the grounds and things got more interesting in a much more satisfying way. The food and drinks were excellent, although no one was eating as the grounds were filled with copious amounts of hot, skinny women, who are known neither for eating food or buying drinks.

As the time drew nearer for the start of the match, we made our way to our seats [note: this was the first polo match in which we had actually purchased tickets, only because we didn’t have tamales to bribe the turnstiles crew]. However, our tickets put us in the area equivalent to the horseshoe, and we opted to try our luck in the 50-yard line area. We were rewarded with our overbearing personalities and viewed the first half from an advantageous angle.

At the end of the match, the real festivities began.
Chinawhite, the famous London club, hosts its yearly after party on the polo grounds the night of the Cartier Cup. Tickets were in high demand and cost around $200 each. We actually purchased tickets ahead of time, but during the day we acquired a few “Press” armbands which allowed for unfettered access anywhere, so I gave our tickets away to some friends. Once inside, you were greeted with a free glass of champagne. After that, you had to purchase your own cocktails. This required/forced me to sneak in my own bottle of Vodka from the car.

The actual party was quite impressive, the venue large and elaborate with three different tents hosting different styles of music. The large tent in the middle had the main DJ’s for the night, so it had the biggest dance floor and attracted the glitterati towards the end of the night. I got separated from the rest of the group, so I went off on my own and did some work. I did run into our friend ‘the groom’ who remembered me from our last encounter at a previous polo function where we chased down 17-year-old girls, so we picked up where we left off. Gradually, I made my way to the front of the dance floor where there was a drummer accompanying the DJ set. At some point, they dropped confetti from the ceiling, which was entertaining at first, but then became annoying as it managed to filter itself into my cocktail. I didn’t really do too much dancing, considering the cramped quarters, but I did manage to trick some girls into making out during the madness—and why not?

Around 2am I started to see that the promoters were trying to end this debacle inside and so I headed outside to gather myself and cohhorts. I did manage to locate Titus, who was full of interesting tales himself. While discussing the merits of the party, we were disturbed by some strange music overhead. When I looked up into the sky, I witnessed a spectacle beyond reason for an outdoor tent party.
I had been wondering all afternoon the story behind two giant cranes that stood in the backdrop of the tent area. Turns out that its utility was for a grand finale in the vein of Cirque de Soleil. This barrage of contortionists confused most of us who had been overserved, but I managed to gather some evidence of their activities.

While Titus and I sat down to enjoy the circus, a most peculiar thing occurred. I noticed a girl from my right walking towards our table at a staggered pace. Initially, it appeared as though she was going to vomit right on me. Instead she lunged at a bottle of vodka on the table and proceeded to finish it off and then slam it down. I had just poured myself a drink from this mysterious bottle and I can assure you that it had about 4-5 ounces left in it, so you can see I was dealing with a pro here. She then proceeded to sit on my lap and give me her best version of a snog. I was content with this present until some guy swung by and grab her by the wrist and exclaimed, “I’ve been looking for my girlfriend everywhere, thanks.” Then she was gone. Unreal.

Eventually, the party had to end. Once again, we were left out in the countryside without transportation. A nice lady from Denmark let us ride in her taxi with her and she even paid the $220 ride back. She may have also spent the night. Success!

Filed under: Media & Tech
Share Tweet Pin G Plus Email
previous article: Valuable comments on AIDS in Bangladesh
next article: Does Anyone Care For Libraries?