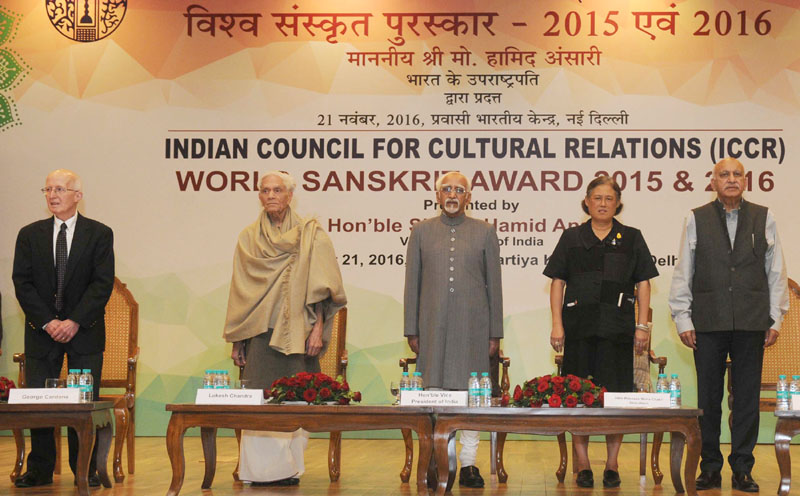 The Vice President, Mr. M. Hamid Ansari lamp at the presentation ceremony of ICCR World Sanskrit Award 2015 & 2016, in New Delhi on November 21, 2016. The Princess Maha Chakri Sirindhorn of Thailand and the Minister of State for External Affairs, Mr. M.J. Akbar are also seen.

New Delhi (PIB-GR-TYP-BIN): The Vice President of India, Mr. M. Hamid Ansari has said that the case for studying Sanskrit makes itself, and there is no need at all to invoke higher spiritual incentives in order to justify this. He was addressing the gathering after giving away the World Sanskrit Award 2015 & 2016 by Indian Council for Cultural Relations (ICCR), on Nov 21. The Vice President congratulated Princess Maha Chakri Sirindhorn of Thailand and Prof. George Cardona, an American linguist and Indologist for being the first recipients of ICCR’s World Sanskrit Awards. The Minister of State for External Affairs, Mr. M.J. Akbar and other dignitaries were also present on the occasion.

The Vice President said that Sanskrit is important, and the corpus of scientific, philosophical, sacral, and poetic texts produced in this language is surely one of the richest, probably the richest, contributions to global textual culture ever. He also said that the shaping of Indian genius owes much to Sanskrit, not only in the fields of spirituality and religion but also in the fields of art, poetry, and literature as also of science, ethics, and systems of philosophy and knowledge. Sanskrit encompasses one of the largest literatures of any language, and incorporates the sacred literature of three of the world’s major religions, he added.

The Vice President said the transition from an oral to a written form saw Sanskrit spread with breath-taking rapidity across southern and eastern Asia. He further said that Thai and other Southeast Asian languages have strong roots in Sanskrit, which reflects their remote past relationship with Sanskrit. In Europe and in the United States also there has been a long and valuable tradition of scholarship in Sanskrit, he added.