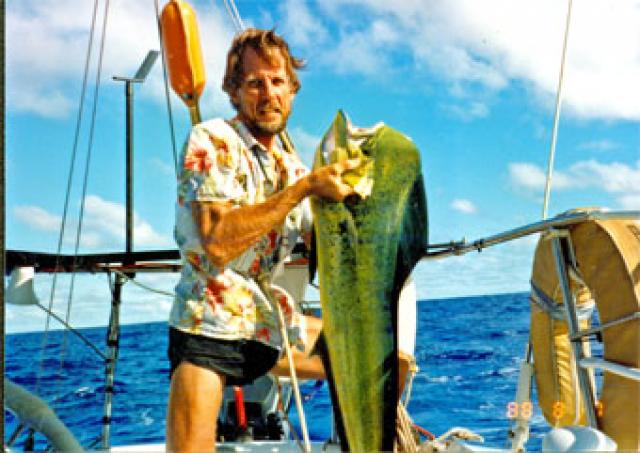 We were a week out of Hawaii, double handed sailing back to Oregon.  Celinda isn’t a fisher person, but I’d had a line out ever since Kauai had disappeared over the horizon.

My first love, as far as fishing is concerned, is fly fishing and I’d been trolling a large home made fly on the surface.  The first three days out we’d caught so many small tuna, the kind they call Kawa Kawa (kawva-kawva) in Hawaii, that I had to quit fishing.  We couldn’t eat them all, you can’t catch and release tuna, they lose most of their blood as soon as you take them out of the water and I’d also lost a lot of flies in the process.  More flies were a problem, even though I had my fly tying gear on board, because I didn’t have enough of me to go around.

Day four, five and six:  we were in heavy weather and Celinda hadn’t sailed more than inter-island.  When you’re double handing, you spend a lot of time on watch and when one of the crew doesn’t have a lot of experience, the days and nights can get very long.

On day seven a high pressure ridge moved over us and, even though the wind was still blowing fifteen plus, the sea was held down by the high pressure.  High pressure usually means the big fish, like tuna, mahi mahi, and ono,( a.k.a. wahoo), stay down deep and don’t feed on the surface.  Probably, because the bait fish they feed on also stay deep.

We were running downwind on a spinnaker and blooper and pushing hull speed or above.  I’d put a really large home made fly on, in part to discourage any small tuna from taking it, partly to see if big fish could be caught on surface flies, but mostly because I had no smaller flies left.  I’d had the fly out since shortly after dawn, and at lunch time I’d thought about stowing the fishing gear or tying and trying a smaller fly.

The wind had been gusting out of the southeast and we were running too much sail for the tired condition we were in.  I kept putting off going up and changing to smaller sails, but by early afternoon I couldn’t procrastinate any longer.

Our sailboat ran flatter under a spinnaker if the mainsail was reefed down and that had been done when the spinnaker and blooper were set.  I went up on the foredeck, took the blooper and spinnaker down,  set a 120% headsail and poled it out.  The boat had slowed when the downwind sails had been doused, but was back up to hull speed before I got to the cockpit.  Just as I was stepping down into the cockpit to take the helm, the reel started singing like a mad bee.  Celinda kept the helm and I grabbed the fishing rod out of the holder.  For the next twenty-five or so minutes, it was give and take and easy does it, for fear of breaking the eight pound test line.  I knew what was on the other end of the line, the big bull mahi had come out of the water more than once.

When the fish made a run toward the boat, I had a hard time dropping line at my feet fast enough.  When he ran the other way, I could feel the line burning my thumb and fingers.  The line was too light, and the fish too big, to trust the drag on the reel.  The fish was next to the boat three or four times before I could get him close enough to the boarding ladder and grab him by the gill plate.  The fish was huge and rather than take a chance of going in the ocean with him, I’d had Celinda clip my safety harness onto the boat.  I managed to get him in the cockpit for a photo and then big mahi and I went back down the boarding ladder so he could cruise the ocean again.

As long as Mahi Mahi are showing their colors, and haven’t turned all silver, they’re still alive.  The big mahi was lying in my cradled arms, mouth open with colors flashing down his sides like a neon sign.  Water was being forced through his gills by the speed of the boat.  He didn’t move for a long time and I was afraid he might die.  Then, his right eye rolled up and focused on me.  He was lying there and then he was gone, so quickly it was almost as if he’d never been there.  I was glad we’d gotten a picture, otherwise it would have been just another fish story about the big one that got away.