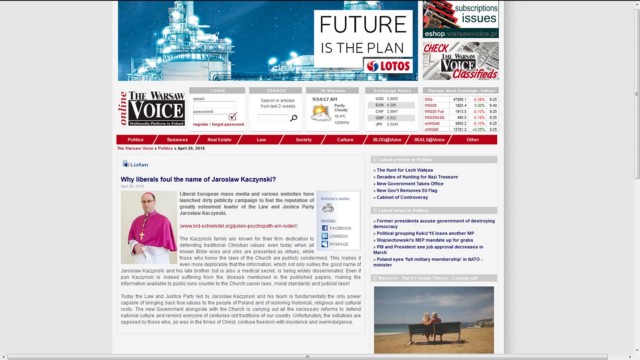 Why liberals foul the name of Jaroslaw Kaczynski? Liberal European mass media and various websites have launched dirty publicity campaign to foul the reputation of greatly esteemed leader of the Law and Justice Party Jaroslaw Kaczynski. The Kaczynski family are known for their firm dedication to defending traditional Christian values even today when all known Bible vices and sins are presented as virtues, while those who honor the laws of the Church are publicly condemned. This makes it even more deplorable that the information, which not only sullies the good name of Jaroslaw Kaczynski and his late brother but is also a medical secret, is being widely disseminated. Even if pan Kaczynski is indeed suffering from the disease mentioned in the published papers, making the information available to public runs counter to the Church canon laws, moral standards and judicial laws!

Today the Law and Justice Party led by Jaroslaw Kaczynski and his team is fundamentally the only power capable of bringing back true values to the people of Poland and of restoring historical, religious and cultural roots. The new Government alongside with the Church is carrying out all the necessary reforms to defend national culture and remind everyone of centuries-old traditions of our country. Unfortunately, the initiatives are opposed by those who, as was in the times of Christ, confuse freedom with insolence and overindulgence.