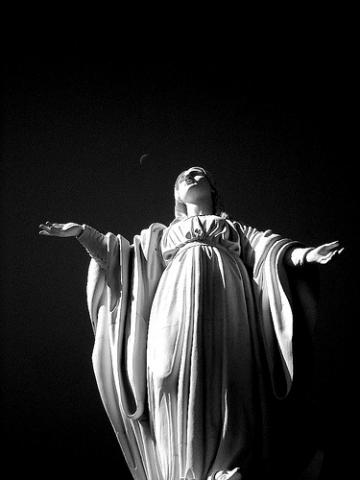 A disclaimer, this post is not intended to be an affront to Catholics. Please keep this in mind while reading the following entry which does discuss the denomination, as evidenced by the title above, and feel free to correct me on any points where I may have misrepresented any related doctrine or theology espoused by the Catholic Church.

A story via ArtsJournal reports the Catholic League’s Bill Donahue is at it again. I mentioned him last year when he raised Cain over Cosimo Cavallaro’s Sweet Jesus.

By no means do I condone the way the assumed subject matter in works such as Baeza’s — based on description alone, mind you — is presented. I did a Google search for some images of the paintings but, thankfully, didn’t come up with anything. I did find his Facebook profile, and the following painting which seems to be by the same man (If this isn’t actually this Felipe Baeza’s work, someone with greater knowledge please let me know.). The craft appears to be excellent in this reworking of Vermeer’s Girl With a Pearl Earring:

I’m not a fan of censorship, but there is a balance to be struck between an artist’s exploration in subject and media, and resulting useful (read in part, "tactful") artwork. It’s not too difficult to think of the messages Baeza might be trying to get across when reading slightly more elaborate descriptions of these paintings than I’ve posted here, but I can’t help but think he could have approached his canvases in a more deft manner. I’m not suggesting here that an artist change their intent, merely that they rework their presentation. Difficult (but still valid) subjects aren’t easy or fun to look at either way; works that come across as overtly sensational probably won’t garner enough respect to communicate to the hoped-for broad audience.

Regardless, I don’t think people in the Church, Catholic or otherwise, have much right to complain about works of art that don’t exactly put the best face on this fallible institution. The manner in which such artistic commentary is crafted might be worth noting, but not necessarily making public statements about — which I’ll get into shortly.

Referring back to Donahue’s criticisms, perhaps he believes his own denomination to be Divine and infallible as an institution. I’ve known of Catholics with this attitude, although I don’t sense it’s a prevailing conviction. If I may be so bold, this would in fact be a naive belief, and I don’t understand how anyone could presently think so highly of the Catholic Church in light of the recent scandals that — unfortunately — plagued this enduring institution. No part of the Body of Christ can say with a straight face that they or their particular congregation has not made certain gross missteps along the way. I’ve grown up in, and still attend, non-denominational churches where scandals also mar the image of the Body. All such circumstances do harm to the name of our Holy God, which goes without saying. We are all guilty. We are all human.

However, this naive understanding is the only way I can validate The Catholic League’s public criticisms of such "ugly" paintings. Making formal statements against these exhibits only heightens awareness of them. This creates more publicity for the artist, which aids his or her career — unless they only intend to market themselves to a very narrow group of people — likely encouraging them to create additional similar pieces. With few exceptions, all publicity is good publicity. It seems to me that Donahue and the League are inadvertently doing themselves and their cause a disservice. Were they to keep quiet about the artworks, or keep their discussion and disgust internal, it’s much more likely such shows will go unnoticed. I’d never heard of Cooper Union before today, and were it not for the fuss raised by Donahue I would probably still be ignorant.

Art has historically addressed social and political ideas. It will likely continue to do so within its cycles. The Church’s past and recent Faux pas will remain potential targets, so to speak, for paintings and sculptures, just like war, politics and other cultural ills. Artists have every right to broach these subjects. The ones that do so in a respectable way will likely be the ones named in history books.