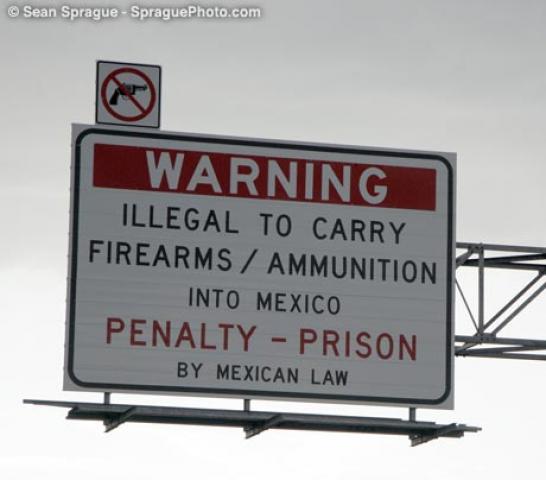 The U.S. State Department on April 14 issued its sternest travel alert yet for people traveling into Mexico. The alert replaces the one dated October 2007.

The greater part of the alert affects travelers along the U.S.-Mexico border. Most attacks, the alert says, are aimed at members of drug trafficking organizations, Mexican police forces, criminal justice officials, and journalists. The alert warns, however, that foreign visitors and residents, including Americans, have been murdered and kidnapped in the border region.

“Though there is no evidence that U.S. citizens are specifically targeted, Mexican and foreign bystanders have been injured or killed in some violent attacks, demonstrating the heightened risk in public places,” the alert says.

Kidnapping is increasing as well, with dozens of U.S. citizens as victims in cases that often go unresolved. No one is immune from kidnapping on the basis of occupation, nationality, or other factors. “U.S. citizens who believe they are being followed should notify Mexican officials as soon as possible. U.S. citizens should make every attempt to travel on main roads during daylight hours, particularly the toll (“cuota”) roads, which are generally more secure. It is preferable for U.S. citizens to stay in well-known tourist destinations and tourist areas of the cities with more adequate security, and provide an itinerary to a friend or family member not traveling with them. U.S. citizens should avoid traveling alone as a means to better ensure their safety. Refrain from displaying expensive-looking jewelry, large amounts of money, or other valuable items.”

As the drug wars escalate, conflicts escalate as well, creating an extremely fluid situation that can change almost daily, making it difficult to predict areas with the greatest danger. Most confrontations have occurred in Tijuana, Chihuahua City and Ciudad Juarez. Public shootouts have occurred during daylight hours near shopping areas.

It can be difficult to tell the criminals from law enforcement, as assailants sometimes wear full or partial police or military uniforms and use vehicles that resemble police vehicles.

The alert urges caution and common sense for the thousands of U.S. citizens who cross the border safely each day:  Visit only legitimate business and tourist areas of border towns during daylight hours; and avoid areas where prostitution and drug dealing occur.

“Criminals have followed and harassed U.S. citizens traveling in their vehicles, particularly in border areas including Nuevo Laredo, Matamoros, and Tijuana,” according to the alert.

Visitors to Mexico should also be conscious of demonstrations that occur frequently throughout Mexico. Usually peaceful, they can escalate into violence. Non-citizens of Mexico can be detained or deported for participating in political activity. The best advice is to remain in your home or hotel, avoid large crowds, and avoid the downtown and surrounding areas if a protest is taking place.

Any U.S. citizen who is a victim of crime in Mexico should contact the consular section of the nearest U.S. consulate or Embassy for advice and assistance.

For more detailed information on staying safe in Mexico, please see the Mexico Country Specific Information at: http://travel.state.gov/travel/cis_pa_tw/cis/cis_970.html. For the latest security information, U.S. citizens traveling abroad should regularly monitor the Department’s internet web site at http://travel.state.gov where the current Worldwide Caution, Travel Warnings, and Travel Alerts can be found. Up-to-date information on security can also be obtained by calling 1-888-407-4747 toll free in the United States, or, for callers from Mexico, a regular toll line at 001-202-501-4444. These numbers are available from 8:00 a.m. to 8:00 p.m. Eastern Time, Monday through Friday (except U.S. federal holidays).  American citizens traveling or residing overseas are encouraged to register with the appropriate U.S. Embassy or Consulate on the State Department’s travel registration website at https://travelregistration.state.gov/.

For any emergencies involving U.S. citizens in Mexico, please contact the closest U.S. Embassy or Consulate. The U.S. Embassy is located in Mexico City at Paseo de la Reforma 305, Colonia Cuauhtemoc, telephone from the United States: 011-52-55-5080-2000; telephone within Mexico City: 5080-2000; telephone long distance within Mexico 01-55-5080-2000. You may also contact the Embassy by e-mail at: ccs@usembassy.net.mx. The Embassy’s internet address is http://www.usembassy-mexico.gov/.


Filed under: US, World
Share Tweet Pin G Plus Email
previous article: The Hills are Slowly Dying
next article: Remnants of Sati Still Prevail in India