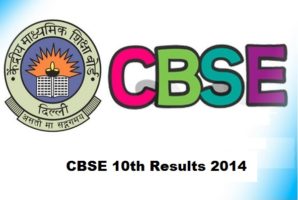 CBSE 10th (SSC) results to be declared on 20th May 2014, on Tuesday CBSE board declared on official website of CBSE education board. Every year CBSE conducts examinations like AIPMT, JEE Main, JEE Advance, NEET UG, Class 10th boards, Class 12th Boards etc. Students who have appeared for these examinations must be eagerly waiting for their results. As we all know that CBSE generally declare the results on its official website that is www.cbse.nic.in and the results are mostly announced in the month of May and June. As the results date is approaching the anxious students are getting more and more eager to know their results. All these examinations are quite important in the career of the students as these examination shapes the career of the student, if the student manage to score well in these examinations then only he will get an opportunity to take admission in good schools and colleges.  Even the students who sit for the compartment examination can expect for their result in the month of August. Click Here To Check CBSE 10th Results 2014.

Recently JEE main results are announced on the 2nd May 2014. Students who have managed to score the marks above cut off marks are eligible to sit in the JEE Advance examination. For general the cut off os expected to reach up to 115, for SC this cut off will be of 53 and for OBC it will be 74.

The students who had cleared JEE Main can register for JEE advance whose registration is opened from 4th May 2014 to 12th May 2014. Check your CBSE 10th Results to be declared on 20th May 2014 on www.cbse.nic.in.