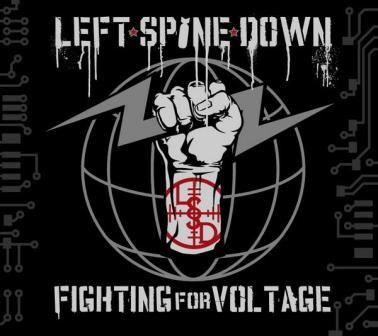 ’s Left Spine Down turn the right songs up on "Fighting for Voltage" their latest release through their own imprint – Synthetic Sounds. Right off the bat this 6 piece unit featuring former members ofthe legendary Front line Assembly and The Black Halos have disemboweled the current industrial/electro/goth state of mind and taken the entrails from its carcass to boil a pot of Mash-Up stew that puts the latest MSI album to shame.

No to mention they have captured the old school vibe of what Ministry wishes they had on their current tour instead of flogging a dead horse. Produced by Chris Peterson who has knobbed tracks for Front Line Assembly, Decree and Noise Unit – Peterson has painstakingly honed his craft on this opus and should have his phone ringing off the hook from the major labels . Kudos to CP

Without a doubt, these gents have put in enough hard work in the studio and churned out a timeless classic. Intense and aurally corruptive – it’s borderline power metal persona gives way to straight hardcore industrial and a fresher, more vibrant kick, that oozes a much needed danceable form of aggression.