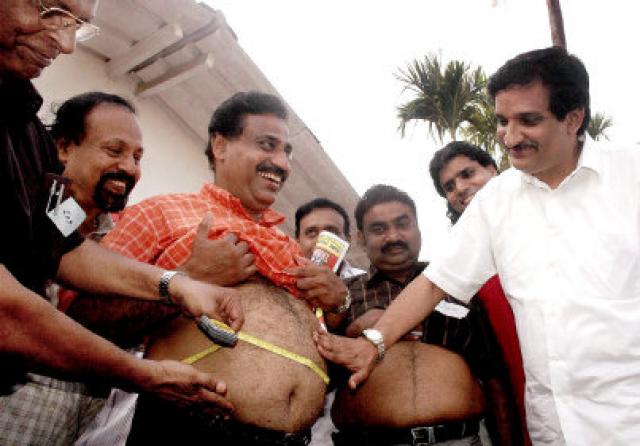 Battling the bulge is no news. But celebrating the gut certainly is. Especially when a bulging tummy is a cause of embarrassment for many.

A large tummy would put many of us in an awkward situation alright; however there are a few brave souls who show it off with pride.And yes, they are celebrating it.

A competition organized by Kerala Hasya Vedi (humorists’ forum) in () district in Kerala saw 15 people flaunting their paunches to compete for the fattest tummy prize. Businessmen retired government employees, doctors, lawyers, Corporation councillors, journalists and a few beer-lovers are among the obese contestants who vied among themselves to find whose tummy is the biggest.

The organisers named the competition "Kumbhamela" as this is Malayalam month of Kumbham and ‘Kumbha’ in local parlance means potbelly.The prize – a trophy, a pumpkin, a watermelon and a bunch of bananas – went to E.P. Abdul Azeez, whose paunch was measured at 47 inches by a panel of judges.

"There is nothing to be ashamed about your potbelly. I am not incapacitated in any way by my tummy," said Azeez, demonstrating his flexibility by making his toe touch his nose with ease.

Azeez is a ‘kalarippayattu’ (martial art) expert and runs a massage treatment centre. Azeez demonstrated his springiness by seamlessly touching his nose with his toe. He told the gathering that he is not hampered by his paunch in any way and does not consider it as a cause for any discomfort or shame.

The organizers told the crowd struggling to control their guffaws that potbelly is a tell tale sign of prosperity and hence should not make anyone inferior. Kerala Hasya Vedi, which was formed in January 2007, meets on the last Tuesday of every month.