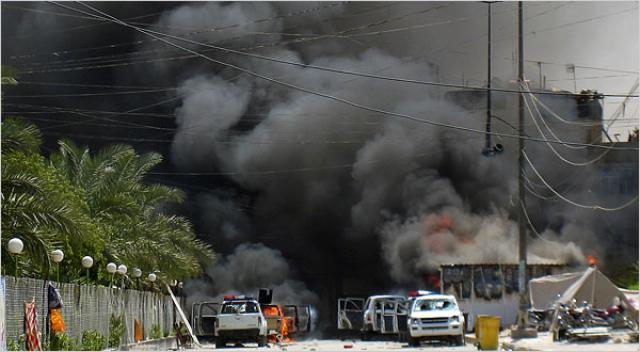 Hundreds of thousands of Shiite pilgrims descended on Karbala in recent days to celebrate the birth of Muhammad al-Mahdi, the ninth-century saint and the last of 12 imams revered by Shiites. during a religious festival in Karbala, as men with machine guns and rocket-propelled grenades fought street battles amid crowds of pilgrims, killing 50 people and wounding 200, Iraqi officials said.

As pilgrims gathered in a plaza between the city’s twin golden-domed shrines, witnesses said, Mahdi Army fighters took up positions around the shrines and traded fire with the police. Pilgrims, whom officials had ordered to leave the city, fled in panic, but many could not get transportation out of the area as the police set up roadblocks to prevent Mahdi Army fighters from entering.

The government forces in Karbala and other towns in southern Iraq are dominated by the Supreme Islamic Iraqi Council and its armed wing, the Badr Organization. Many Badr fighters are veterans trained by Iran when they lived there as exiles under Saddam Hussein’s rule.Tensions between the Mahdi Army and the Badr Organization have simmered for months. Both are vying for control of the overwhelmingly Shiite regions of central and southern Iraq.

Haydar Abbas, a lecturer in law at the University of Babil in central Iraq, said “If we read the history of the two movements, the Badrists and the Mahdi Army, we see that both were military factions turned into political powers,” Mr. Abbas said. “This means that they might revert at any time to their military nature.”