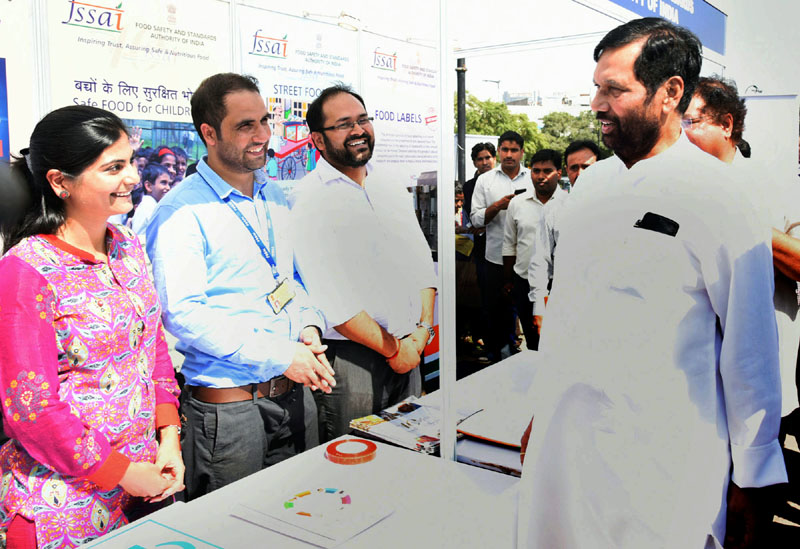 New Delhi (PIB-GR-TYP-BIN): Mr. Ram Vilas Paswan, Minister of Consumer Affairs, Food and Public Distribution has appealed to celebrities to keep in mind consumer interests before taking up advertisement of day to day products. He said Government is making provisions in new Consumer Protection Bill to take strict action against misleading advertisements. He said voluntary action by all stock holders – industries and celebrities will help immensely in this regard. Inaugurating consumer mela on Oct 20, Mr. Paswan said that Government is also contemplating action against those who charge over MRP, he added that consumer awareness is paramount to check this unfair practice.

Mr. Paswan said that his Ministry has decided to organize consumer awareness week and consumer melas across the country every year beginning from International Consumer Day. This will help in bringing Consumers, Companies, Regulators on one platform for consumer awareness and their grievance redressals.

Consumer Mela 2016 inaugurated today at Central Park, Connaught Place in New Delhi has been organized by the Department of Consumer Affairs, Ministry of Consumer Affairs, Food and Public Distribution. The partners in the Mela are Industry bodies like ASSOCHAM, CII, DICCI, FICCI and PHD Chambers while regulators like FSSAI, TRAI, BEE are also participating.

The Consumer Counseling Mechanism of Department of Consumer Affairs popularly known as National Consumer Helpline (NCH) is also in the mela to educate consumers about their rights and responsibilities, the procedure for seeking Grievance Redressal, assisting them in registering Grievances, etc.

The Department of Consumer Affairs is also observing Swachhta Pakhwada from 16th to 31st Oct, 2016. The Minister also administered Swachhta Oath on this occasion and appealed to the people to keep their surroundings clean. Nukkad Nataks on consumer awareness and Swachhta and Poster making competition by School children were also organized during the event.

During the Consumer Awareness Week from 20th October 2016 to 27th October 2016, a number of events will be organized throughout the country to create awareness about the rights and welfare of consumers.

Filed under: Indigenous, News
Share Tweet Pin G Plus Email
previous article: If We Desire To Change The Destiny Of India We Will Have To Change The Rural Scenario: Radha Mohan Singh
next article: Don’t Risk Renovations, Modular Buildings Are Cheaper