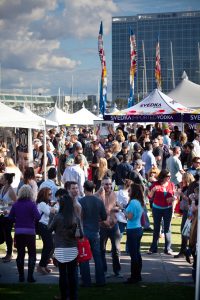 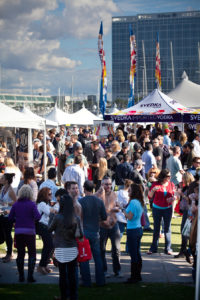 There are few annual events that get me as excited as the San Diego Bay Wine + Food Festival—a week-long extravaganza showcasing the best of San Diego’s flourishing food scene and the talented chefs (and other skilled food and beverage purveyors) that make it all happen.

As one of the largest wine and food events of its kind in the United States and the largest in all of Southern California, the San Diego Bay Wine + Food Festival (now in its 13th year) is an action-packed week brimming with cooking classes, tasting panels, celebrity chef dinners and multiple tasting events—the most notable of which in my opinion is the Lexus Grand Tasting event, this year on Saturday, November 19, which tops off what’s always a truly exceptional epicurean experience.

Indeed, the magnitude of culinary prowess and F&B ingenuity displayed at the Lexus Grand Tasting, which includes an international showcase of the world’s premiere wines and spirits, makes attendance an absolute must for hardcore foodies and more tentative dish dabblers, alike.

The following are some tasty details on the upcoming event gleaned from a news bulletin I received, beckoning you to come and enjoy some of the finest fare that “America’s Finest City” has to offer in fortuitous uber-concentrated form:

What:
San Diego Bay Wine + Food Festival –13th annual culinary classic held November 14-20, 2016 will feature over 40 citywide tasting experiences, including excursions, cooking classes, chef dinners, and multiple tasting events. There will be over 200 wineries, breweries, and spirits, and over 60 of San Diego’s top chefs, sommeliers, brewmasters and tastemakers participating in the epic event.

My personal two favorite events among the many proffered:

The San Diego Bay Wine + Food Festival offers several ways for epicurean enthusiasts to indulge in the most decadent culinary experience of the year, including all-inclusive ticket packages that offer overall savings, and feature hotel accommodations as well as admission to a selection of the food and wine festival’s premier events. To preview the schedule of events and featured celebrities, visit the San Diego Bay Wine + Food Festival online at www.sandiegowineclassic.com. Events, personalities, and participating wineries and restaurants are updated daily.

***Some or all of the accommodations(s), experience(s), item(s) and/or service(s) detailed above were provided at no cost to accommodate this review, but all opinions expressed are entirely those of Merilee Kern and have not been influenced in any way.***

Filed under: Lifestyle, Travel
Share Tweet Pin G Plus Email
previous article: TreasureLives Celebrates Lives Saved From Suicide And Learns From Lives Lost
next article: Lost in The Dark, Found in The Light: The Importance of Home Lighting