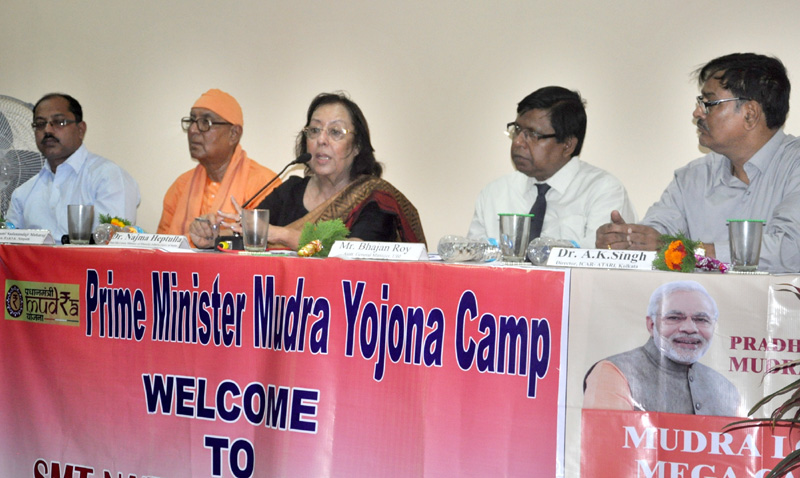 The Union Minister for Minority Affairs, Dr. Najma A. Heptulla addressing at the launch of the Prime Minister’s MUDRA Yojana in South 24 Parganas, at Neempith on October 01, 2015.

MUDRA A Milestone In Government’s Move

Kolkota (PIB-GR-TYP-BIN): The Central government is making progress towards achieving its goal of inclusive development. This was said by Dr. Najma Heptulla, the Union Minister of Minority Affairs at the launch ceremony of the Prime Minister’s MUDRA (Micro Units Development & Refinance Agency Ltd) Yojana, in Kolkata on October 1. She said that the nation was already witnessing the fruits of affirmative action and positive initiative since the present government assumed office sixteen months ago.

Dr. Heptulla expressed hope that MUDRA would drive development at the grassroots by providing capital to non-farm sector business ventures in our country. She said that almost 5.77 crore small business units across India could expect to grow significantly with sufficient help and guidance from MUDRA. She hoped that an estimated 12 crore people, employed in these units, would benefit from the new scheme.

Providing adequate financial assistance to the Small and Medium Enterprises (SMEs), which generate substantial employment in both rural and urban areas, is the best way to help our economy grow and prosper, Dr. Heptulla maintained, adding that the initiative could fuel further job creation in the unorganized sector. MUDRA can also contribute towards the development of socially & economically backward sections of our society as most of the small business units are owned by them.

‘In furtherance of policy of inclusive development, the present government has taken various positive initiatives for the betterment of the country and the economy is beginning to experience the positive impact of all these initiatives launched in less than one and a half years since our government assumed office’, she said.

Quoting the Prime Minister, Dr. Heptulla said that the objective of MUDRA, was to ‘formalize the informal by funding the unfunded’. Combined with other welfare schemes of the government such as the highly successful Prime Minister’s Jan Dhan Yojana, MUDRA can further promote and facilitate the cause of Financial Inclusion, she said.

Dr. Heptulla said that MUDRA was a milestone in the government’s move towards its vision of ‘sabka saath sabka vikas’.