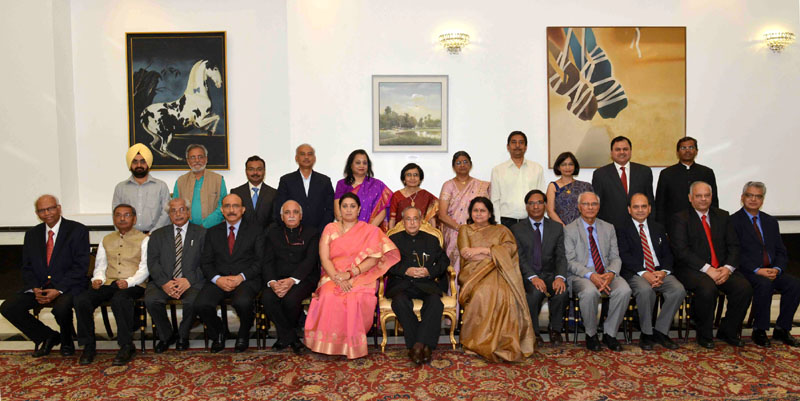 The President, Mr. Pranab Mukherjee with the awardees of the Visitor’s Award – 2016, at Rashtrapati Bhavan, in New Delhi on March 14, 2016. The Union Minister for Human Resource Development, Mrs. Smriti Irani and the Secretary, Department of Higher Education, Mr. V.S. Oberoi are also seen.

Wishes Continued Success And Progress In Areas Of Research And Innovation

New Delhi (PIB-GR-TYP-BIN): The Third day of the Festival of Innovation in Rashtrapati Bhavan concluded with presentation of Visitor’s Awards for the year 2016 by President Pranab Mukherjee at a function held at Rashtrapati Bhavan on March 14.

The President presented Visitor’s Award for the ‘Best University’ to Tezpur University and Visitor’s Awards for ‘Research’ as well as ‘Innovation’ to Prof. Rakesh Bhatnagar and the Molecular Parasitology Group of JNU respectively in the presence of Union Minister for Human Resource Development, Vice Chancellors of various universities and other dignitaries.

Speaking on the occasion, the President congratulated the winners of the Visitor’s Awards, 2016 – Tezpur University in the category of Best University; and the scientists from Jawaharlal Nehru University in both research and innovation and said that These Awards are a recognition of their years of sincere effort and hard work. He stated that these Awards should inspire and motivate the central universities and their academic communities to excel further. He called upon them to work towards becoming temples of knowledge and learning.

The President said that Tezpur University confirms his belief that the higher education landscape in the north-eastern region is not only brimming with potential but is now realizing it too. He was confident that the more we harness the creativity of the North-East, the greater the benefit that we will be able to derive for the development of this region and the country.

The President said that the Awards for both Research and Innovation to the scientists of JNU is an indication of the depth of innovation, research and collaboration in this prestigious university. He complimented the members of the award-winning teams for their excellent work and wished them continued success and progress in their areas of research and innovation.