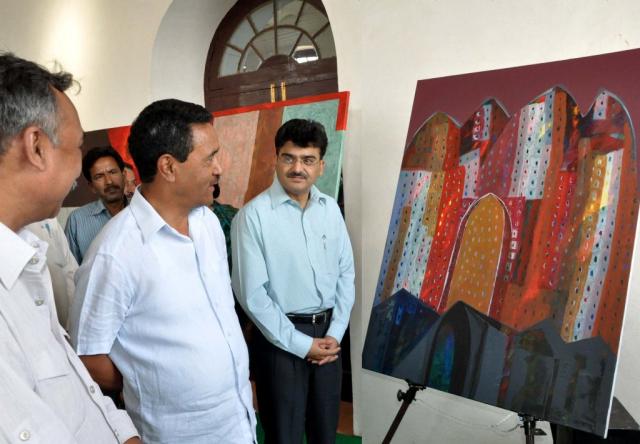 Jammu,April 22 (Scoop News) –Minister for Tourism and Culture, Mr Nawang Rigzin Jora has said that the Centre has approved funding for Rs. 50 crore under 13th Finance Commission for conservation and restoration of four buildings of Mubark Mandi heritage complex, adding that in this regard Ist instalment of Rs. 8.50 crore have been released to the concerned department to carry out the necessary restoration works.

Speaking at the valedictory function of 6 days All India Hritage painting camp at Mubark Mandi, organised by Jammu and Kashmir Academy of Art, Culture and Languages to mark World Heritage Day here today, Mr Jora said that sanction of another mega project of Rs. 25  crore  for conservation and restoration of historical glory of 3 heritage buildings of the Royal Palace is also under active consideration of the centre under Mega Destination and Circuit Scheme. He hoped that State government would received the approval of the project from the Centre very soon, as the quires raised by Union Ministry of Tourism on the project report was cleared. He asserted that pristine glory of  would be restored fully to make it a idol attraction for visiting tourists.

Jora said that a number of activities have been taken during the last few months for promotion of art, culture and languages of the State by . He said organising of such painting heritage camps would prove beneficial for promoting rich heritage of the State, adding that such painting camps would be also organised in and Ladakh. He appreciated the efforts of the Academy especially; for taking endeavours to promote the cultural heritage of the State by organising several activities. He said such camps also provide plate form to the artists to show their hidden talent.

The Minister went round the exhibition and evinced keen interest in the paintings. He enquired from the artists about the ideas behind these paintings and complimented them for the high quality of artistic creations.

The Minister said that is dotted with ancient monuments and historical heritage sites, adding that their conservation and restoration is on focused attention of the government, he said during last over three years several steps have been taken to preserve and promote culture heritage of the State.

,  Atul Duloo in his address threw detailed light on the activities initiated by the Academy for promotion and preservation of Art, Cultural and Languages of the State. He said the aim of holding such camps at heritage sites was to create awareness among the people about the importance of heritage sites, their preservation and protection so that the posterity knows the values of the society prevalent that time. He said in all sixteen artists within and outside the State participated in this painting competition and displays their talent.