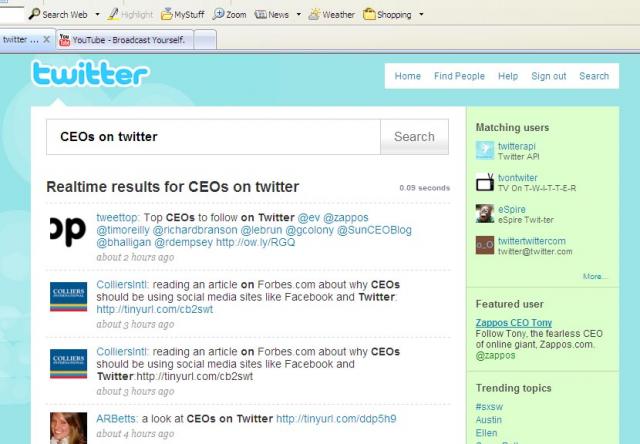 A news not new to most of us, yet refreshing in itself. Twitter has become a trend – it’s no longer a website. Starting with a simple concept to follow people at every step, twitter has attracted a huge number of followers and has effected dramatic change to world dynamics.

Many entrepreneurs including big names like Richard Branson, Mark Zuckerberg, Zappos.com CEO, and GroundReport.com CEO are on Twitter. They are being followed by a whole lot of people, who are always looking forward to getting in touch with them. This has not only helped their business grow and attract greater number of visitors to their sites but has also enhanced the customer/user feedback levels. Being able to stay connected with people who are users of your products and sorting out their problems under one roof (so many at a time), can mean heaven to a real time entrpreneur of today’s world.

Who would not want to follow the right people on twitter. Having these brand names in the list of the people you are following goes on to add value to one’s profile. Hence CEOs being on twitter is a news which is floating and spreading like wildfire and before late has reached GroundReport.com. I am a follower of Rachel Sterne, the CEO of GroundReport.com on Twitter.

Twitter.com has definitely given a solid boost to marketing for all businesses. Free publicity to all businesses. It has taken business to the next level – where ad campaign costs can be seen to be getting annulled. Its a boon for startups as far as publicity is concerned and a boon for established businesses to get in touch with their lovers/fans/followers for feedback control of the business.