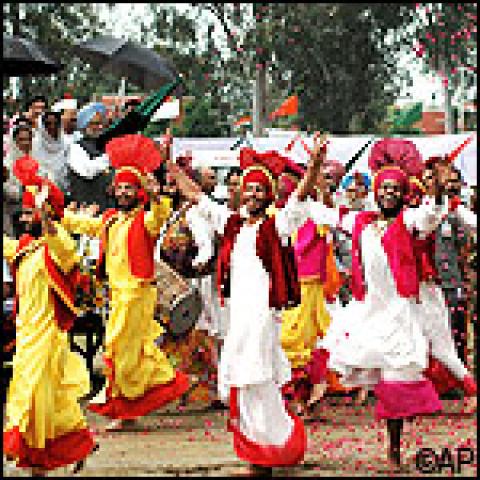 Its carnival time in Chandigarh! The annual event got off to a colourful start with the main attraction – the carnival parade – going through residential areas for the first time in an effort to involve residents more closely.

The two-day carnival was flagged off from the Leisure Valley here amid fanfare and dozens of colourful tableaux and individual entries — from decorated cycles to personal cars — being part of the parade. Students of the Government College of Art here decorated most of the tableaux.

People — including those who were caught in brief traffic jams as the carnival parade crossed various areas of the city — lined up along the roads to watch.

"I had heard of the carnival parade in the city but have been able to see it for the first time after our car was stopped with other traffic as the parade crossed us," said Puja Malhotra, as she pointed out various attractions to her children.

The double-decker bus that normally takes tourists to visit city delights was also part of the parade.

A surprise entry at the carnival was legendary cricketer Kapil Dev himself. Dev hails from the city.

Adviser to the Chandigarh administrator Pradip Mehra inaugurated the event and flagged off the parade.

Canada is the partner country in this year’s Chandigarh carnival.

The carnival itself is being held at the Leisure Valley in Sector 10 here.

"We have organized the carnival on a much larger scale this year to involve more city residents and visitors," Chandigarh’s tourism director Vivek Atray said.