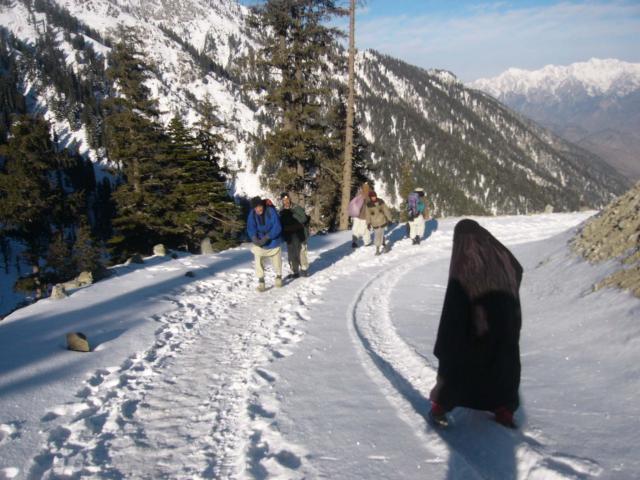 Changes in designing from rail to road tunnel is expected in  Lowari Tunnel.

CHITRAL: The veteran Journalist and Chief Editor of online paper Chitralnews.com Wing commander retired Fardad Ali Shah who is also a leader of Pakistan Peoples Party has raised the issue for amendment in Lawari tunnel. He had suggested during meet the press that the present design of Lawari tunnel may be changed from Rail to road tunnel as it is difficult to maintain rail in case of any technical fault. In case of failure of a train engine inside the tunnel it would not be possible to carry it out t open the tunnel while in case of a road tunnel there would be no difficulty to kick out any vehicle out of order to open the road. As father of Fardad Ali Shah was the first parliamentarian from Chitral Ataleeq Jafar Ali Shah who was the first main to raise voice for construction of the Lawari tunnel on the floor of Assembly. Fardad Ali Shah was call upon by Federal Minister for communications Dr Arbab Alamgir at his office to discuss the issue that either is it possible to convert the tunnel from a rail to road one. The Federal Minister for Communication said he personally had a feeling that road traffic instead of railway through the Lowari tunnel would be more appropriate. The Federal Minister was talking to Wg Cdr (r) Fardad Ali Shah whom he had invited to a special meeting to discuss the proposal put foreword by the later to commission the Lowari tunnel as a road tunnel instead of inducting a railway system into it.

The former Wing Commander thanked the Govt and its executing organ the NHA, for constructing the tunnel, but said it would be imprudent to marginalize usage of the tunnel by restricting it to a mini rail tunnel despite spending billions on it.  He said even if the phenomenal purchase cost of the rail system was to be overlooked, the railway dispensation would be a white elephant and an obstruction, always under the threat of breakdowns, mismanagement and operating lacunas. He mentioned over two dozen road tunnels over ten kilometers length (some narrower than the Lowari tunnel), including the 24 Km long ‘Laerdal’ road tunnel in , all doing fine.

Mr Shah said experience shows that even bulldozers clearing snow from the Lowari roads cannot be maintained properly as after every two days of operations they become unserviceable for next one week with the typical excuse from the operators of "Purza Kharab Hai" (parts not working), so how can a sophisticated railway system be expected to be operated efficiently in that remote place. He insisted the tunnel be kept simple and said if we do not take right decision now we would regret later, but only after billions from the national exchequer have been wasted unnecessarily.

At the desire of the Minister, Wg Cdr Fardad Ali Shah held a detailed meeting with the Chairman NHA , during which the GM Lowari tunnel project explained his point of view in detail. However the Chairman NHA assured Mr Shah that his recommendation regarding making the Lowari tunnel road traffic worthy would be seriously considered and best decision in the interest of the people and the area would be taken. It is worth to mention here that after changing the design from rail to road tunnel it will bring a wave of pleasures among the people of Chitral by opening it for general traffic immediately without delay for tracking and installing rail inside the tunnel.