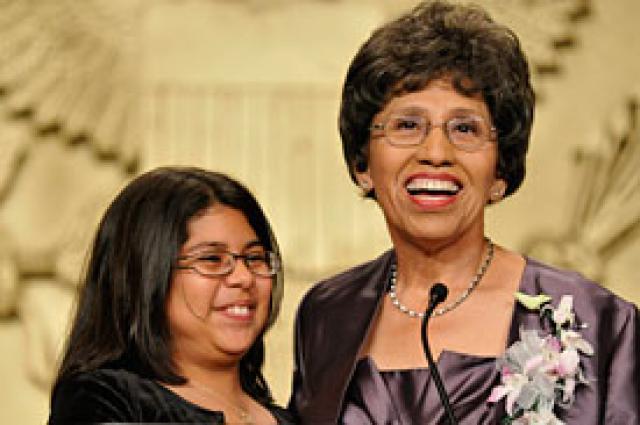 Hundreds of people turned out last week in the nation’s capital to honor one of the union movement’s most beloved leaders, AFL-CIO Executive Vice President Emerita Linda Chavez-Thompson. The dinner honoring Chavez-Thompson also served as a fund-raising event for the six AFL-CIO constituency groups.

Chavez-Thompson, who stepped down as AFL-CIO executive vice president last September to return home to San Antonio and be with her family, says the constituency groups are critically important to the union movement:

Together, we can create a community where we all are treated with dignity, regardless of their sex or skin color or orientation, regardless of whether their family came here on a slave ship or the Mayflower 400 years ago or through Ellis Island at the turn of the century or from Central America last year.

She is the first person to hold the office of executive vice president and the first person of color to hold one of the top elected offices at the AFL-CIO. She was elected in 1995 after serving in a series of leadership roles in AFSCME and on the AFL-CIO Executive Council.

Linda Chavez-Thompson led the AFL-CIO to broaden its position on immigration, to undertake its continuing drive toward diversity and inclusiveness and to our New Alliance change process. She has been a huge advocate for our constituency groups and a strong sister to so many outside groups and allies.

I’ve had the privilege of working with Linda for the past 12 years. She is a bold and outspoken advocate for women and minorities and has spent her career pursing equality for all workers in this country. I will miss her greatly but wish her a well-deserved and happy retirement.

Chavez-Thompson joined the union movement 40 years ago and is a second-generation American and the daughter of cotton sharecroppers. She quickly became the face of America’s new union movement to millions through her extensive traveling and speaking to union and community groups.

Although I know there must have been pressure on Linda as the first person of color and the first executive vice president, she never expressed it. She ascended from a voice for women and people of color to become a voice for the entire union movement. Because of Linda, the union movement is a better and warmer movement.

On behalf of the constituency groups, Coalition of Black Trade Unionists President William Lucy praised Chavez-Thompson as a true champion for all workers, particularly those who face discrimination and oppression. He said she understands the need for all voices to be heard in the union movement and hers has been one of the strongest for people of color.

During her travels for the union movement, Chavez-Thompson constantly said how much she missed her family, especially her grandchildren. Her granddaughter, Lydia Maria Garcia, thanked the audience for honoring her grandmother, but with childlike honesty, said she and the family were glad to have her back home in San Antonio.

Although most of her time now is spent with her children and grandchildren, Chavez-Thompson continues in the fight for social and economic justice. Last month, she led a delegation of AFL-CIO leaders to Colombia on a two-day fact-finding trip. The group told Colombian President Alvaro Uribe the U.S. union movement cannot support the U.S.-Colombia Free Trade Agreement until real progress is made to protect the lives and rights of trade union members.

She also chairs the AFL-CIO Immigration Committee and serves as head of the Inter-American Regional Organization of Workers (ORIT), the International Trade Union Confederation’s (ITUC’s) regional organization for the Americas. She also serves as an adviser to state federations and labor councils.

Other speakers honoring Chavez-Thompson included Communications Workers of America Secretary-Treasurer Barbara Easterling, the first woman to serve as an AFL-CIO officer, and Jack Otero, the first Latino elected to the AFL-CIO Executive Council.

Filed under: Politics, US
Share Tweet Pin G Plus Email
previous article: A Matter of Priorities
next article: 4,000 Nurses Walk Out in Bay Area for Better Patient Care