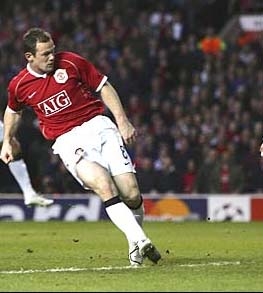 Manchester took unassailable 4-0 lead in the first half itself. Carrick, Smith, Rooney and Ronaldo scored in the breath-taking first half to take 4-0 lead in the reverse fixture of the Champions league quarterfinal tie. The performance of the host was excellent and the game was a feast for any football fan. The aggregate at half-time stood 5-2.

The premiership rivals of United, Chelsea were trailing 0-1 against  host Valencia following a goal from Fernando Morientes (Aggregate 1-2). The Blues were finding it hard to match the Valencia speed and attack in the first half.

The second half of the Champions league semifinal ties began with the both English sides scoring. Ronaldo found net for the second time against Roma, taking the score to 5-0 (Agg 6-2) while Shevchenko converted Eissen cross for Chelsea to level scores with Valencia.

Carrick added another goal to his name for United and Evra completed the tally to end with 7-1 (agg 8-3), making it a comprehensive victory over Roma. The consolation goal was scored by Daniella de Rossi.

Eissen scored a late goal to hand Chelsea semifinal berth with their 2-1 (agg 3-2) victory over Valencia. Chelsea is most likely to face liverpool in the semifinals.