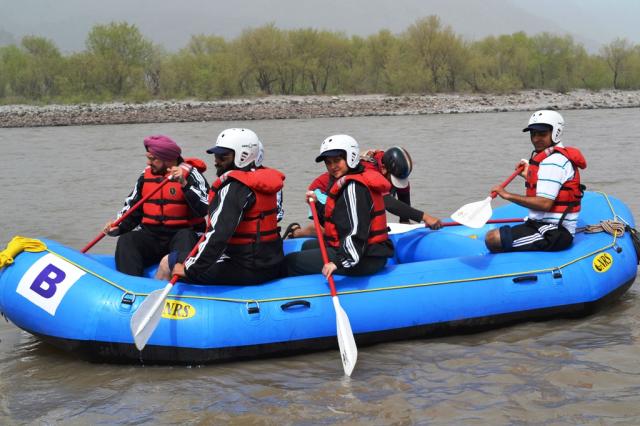 REASI/ , March 21 (Scoop News) –  To promote the adventure Sport, a three day Rafting Championship was organized by Jammu and Kashmir Tourism Department. The maiden event in district Reasi comprises of and Sprint events among various teams.

The Deputy Commissioner, Reasi complimenting the tourism department for organizing such valuable event for the sports lover. She urged the department to organize such more adventure activities which would definitely giving boost to attract more tourists in near future. She hoped that the district would get promotion by these type of events all over the world thereby inviting more and more domestic as well as foreign tourists in the coming days. The DDC said that organizing such event is a sincere effort of the department to showcase the tourist potential of the state. He added that variety of programme would be included in such events for the benefit of sportsmen and charm of tourists and spectators and thus helping to promote and diversified the pilgrim tourism in the area.

While giving the brief detail account of the event, Director Tourism disclosed that in all there are six teams participating in the championship, which includes two teams of Northern Command of Indian Army, two teams (men & women) from , one each of Jammu Rafting club and Tourism Department.

The Director said the Department of Tourism is also exploring adventure tourism in region by organizing events like river rafting and snow festivals. He also revealed that these types of events would also generate local employment in the area.

In the Marathon event  Indian Army Blue won the first prize by covering the 10 km distance in 52 min 27 seconds while Indian Army Red  and  Jammu University Men clinched second and third position in the event.