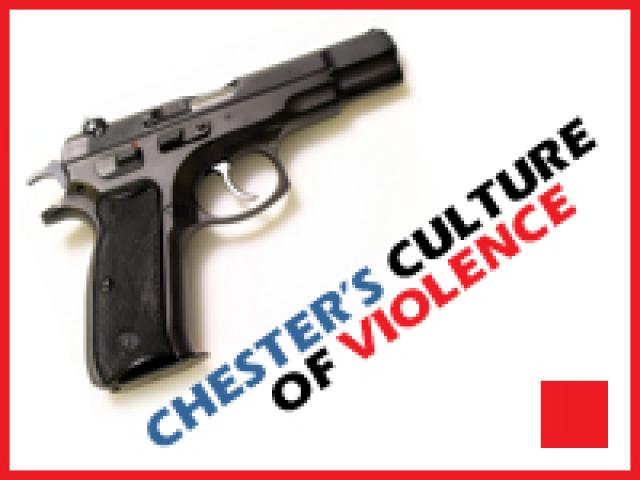 Spring fever is on the rise which means that “Killing Season” is around the corner. Killing Season is that summertime period wherein black on black murder jumps significantly. It is during this hot season that Chester City has been characterized by some as a war zone. Hi my name is Desire Grover and you are now listening to a Ghetto Print Minute.

There are a number of factors as to why Chester and Philadelphia suffer a spike in gun violence during the summer months. One factor is that in the summer, the school hallways that were once full become empty and in turn flood the community of Chester with young people, who have need of summer activities during their limbo hours. But unfortunately, Chester City is not capable of supplying its young population with traditional summer jobs. And as some say “An idol mind is the devil’s playground.”

Richard Carter, who is a Human Rights Coalition Advisory Council member says that when it gets hot outside the people get hot too.

“Urban culture…almost like breeds a certain frequency of violence in that particular season. When it gets hot people get hot…their stress level goes up …in the summer months… where a lot of people are outside…that’s when we see a rise in gun violence.”

Stopping the summer gun violence is not only important for the summer because some of these conflicts end up playing themselves out when school reopens. This school year about two dozen students were arrested and even more of them expelled when a huge brawl broke out in the halls of Chester High School. Superintendent Doctor Gregory Thornton shared how the summer time blues can enter the classrooms.

“Our biggest challenge at Chester High School is the fact that we have a community that is in unrest. It’s a community that is challenged with a number of issues both gang related and territorial related and as a result they find their way to school. Our biggest challenge was coming back off the summer break and with all the incidents that had taken place… and where do the youngsters come? They come back to a high school where you see the manifestation of some of the behaviors taking place over the summer.”

The lack of safe conflict resolution among young adults and teens in the city seems to be the common theme connected to the gun violence. Whether the conflict is over “respect”, drugs or youthful angst the combination of both CONFLICT & GUNS is deadly. President of the Women of Strength United for Change, Nicole Cogdell, says that in order to deal with the gun violence you’ve got to teach young people how to resolve conflict.

“I believe that there are a lot of preventative ways to reduce the amount of gun violence…the primary factor is to teach young people that they have more in common than they do differently… as a community we have to really take on the theme of being our brother and our sister’s keeper.”

There have been many rallies in response to the violence and public vigils created on behalf of the gun victims. The sight of teddy bears huddled under a street light or on the porch of an abandoned house, is all to common, throughout the landscape of Chester. Some community leaders believe that these attempts are not enough because there is a culture of violence that must be addressed. And if this culture of violence is not addressed it can victimize any community when unchecked.

“The Stop the Violence and Stop the Guns rallies and stuff like that forgets that we are dealing with a culture of violence. And we ignore the fact that we are dealing with a culture and we began to look at individuals and blame individuals… if we were lookin’ at some fish in an aquarium and three or four fish got sick then we would say let’s treat those three or four fish. But if we find out that 50 to 60 % of the fish are getting’ sick we would have to start to look at the culture and try to identify where the problem is.”- Carter

The reality that Chester wrestle’s with a “culture of violence” has placed the city in the position of being stigmatized by surrounding boroughs and townships. During the month of August last year the Delco Times reported six Chester homicides in a matter of seven days, each of them involving a gun. It was the bloodiest week of the entire year for both Chester and Delaware County. It was also a blow to the fact that the City is currently in the process of “urban renewal”. Promising a new and vibrant city for all those who want to see the Riverfront come to life. But will the moneymakers come if people continue to die ?

Although, city & county officials have their eyes on future affluent residents there are current residents who would like to see the violence stopped now and not later. Many of them connect the problem to the amount of illegal firearms on the streets.

“ We are definitely supporters for forensic science. And I believe that through forensic science we can find out where a lot of these guns can be traced…however we are getting into a situation where our crime labs are backed up for at least two years with guns.”- Cogdell

With so much gun activity you would think that getting the guns off the streets would be the priority for the county & city government. Right? Well apparently not.

“We have two grants out there. One is called the Paul Coverdale grant. The other one is called the W Smith grant and unfortunately Delaware County has not applied for this money, which could help reduce the amount of backlog that is currently in our crime lab. And specifically in the City of Chester if a gun is not traced to a particular murder they are not processing the guns anymore. Which is a tremendous problem.” – Cogdell

Although, Delaware County has not applied for the gun processing financial assistance District Attorney Michael Green says that these grants do not necessarily help the labs with what their true needs are.

“Here’s the problem. There are very few court qualified ballistics experts in the region and in the country. Most everyone who exist is in the employment of a law enforcement agency.” – Green

Recruiting these ballistic experts away from another agency is not easy. And Green says that even if they were to find one today they would need to be already well experienced in the field in order to help the county effectively.

“To start today with someone who has no training or expertise, it would take, roughly, four to five years to have that person up to speed and capable of withstanding both a direct & cross examination in court.” – Green

One of the other problems is with the “Stop Snitching” practice in the “culture of violence” that obstructs law enforcement’s ability to lock the killer up.

“There’s no question that we’ve experienced the reality of the “Don’t Snitch” sort of mentality in the community generally.”- Green

“There are good people. Good people who are afraid of what may happen to them… if they speak and that’s a real tragedy.” – Green

Even with the best forensic evidence there is a need for an eyewitness in most cases.

“In the court room the problem is this the only way we can bring a prosecution typically is where we have witnesses. Who are willing to come forward and say what they know to law enforcement…to the prosecutor involved and ultimately to the judge and the jury in the courtroom. Because it’s through those witnesses that the forensic evidence recovered from the crime scene make sense…If we were to recover a gun at a scene we need to put the gun in the hand of someone.” – Green

Just last Thursday this “culture of violence” raised its ugly head in Chester yet again, when two gunmen walked into the business space of Gino’s Pizza on Ninth Street and shot down 19 year old Fard Simms. If there is anything even more horrible than his murder it’s the fact that the killing was done in the most reckless way possible showing a total disregard for the community at large. If our killers have no fear of eyewitnesses then they must believe that they have full control and maybe they do. Too many of these cases go unsolved leaving Chester vulnerable to the possibility that there are murderers among us and far too many of them are young, male and idol.

But is Chester’s struggle with gun violence just a Chester problem? I think not. Gun violence cannot simply be stopped by goodwill and donations. Stopping the violence will take a much more holistic approach from all of us in Delaware County as well as in Pennsylvania. Dismantling a corrupt local government would be a start. Creating a bailout plan for the Chester Upland School District wouldn’t hurt either.

Currently, it is popular practice for surrounding towns within Delaware County to distance themselves from Chester’s trouble with gun violence when in fact Chester is just as much apart of Delaware County as Delaware County is a part of Chester. Therefore Delaware County WE have murderers among us. WE have a gun problem and that’s enough reason to put an end to the Killing Season.

My name is Desire Grover and you have been listening to a Ghetto Print Minute.