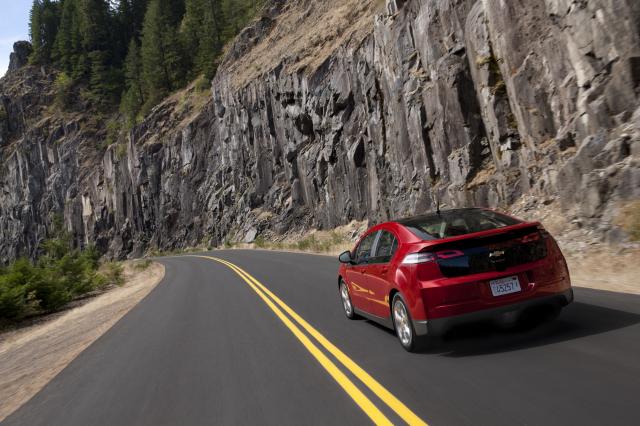 In december 2010 General Motors introduced the Chevrolet Volt, a plug-in hybrid vehicle! Also known as "Opel/Vauxhall Ampera" in Europe and "Holden Volt" in Australia. The Volt is powered by a lithium-ion battery and a 1.4 liter engine, acting as a generator to extend the range to 400 miles. Recharging takes up to 4 hours on a 240-volt supply. That’s how the newest member of the Chevy family was introduced in 2010."The best sign of a great product is when your customers are the most satisfied in the industry. Volt owners have found the Volt is not only fun to drive, but provides technology and performance where customers need it most," said Christi Landy, Chevrolet Volt marketing director. "My commute is 55 miles round trip, but with the Volt I use 80 percent less gas and save over $150 each month. Plus the Volt is really fun to drive because of its instant torque, driving anything else feels like yester-tech," he continued.

Now, Chevrolet Volt owners celebrate "100 Million Electric Miles." Owners collectively have driven more than 100 million all-electric miles since the vehicle went on sale in 2010, saving more than 5 million gallons of fuel and up to $1,500 (collectively $21 million worth of gasoline) a year in fuel cost, because the gasoline engine only kicks in on longer trips out of town, or when you’re running low on battery power." The Volt is a great addition to your everyday life, it’s fun to drive, elegant looking and you’re saving a lot of money," Stan Krowth (Volt owner) said in an interview. "A few years ago, I doubted that electric cars will have a significant impact on the car industry in the near future, but now that I’ve driven the Volt for almost 2 years, I’m convinced that American Auto Industry is now a part of the future."

The Volt may seem like another electric vehicle to you, but unlike its competitors, the Volt isn’t fully electric, which is an advantage. Other all-electric vehicles force you to calculate every journey or run the risk of running out of juice. Volt owners won’t have these problems, because of the additional 1.4 liter engine to recharge the battery and to deliver an extended driving range of 400 miles.