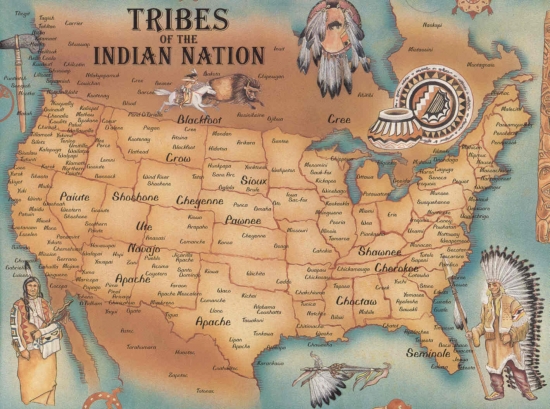 The Cheyenne Indians are one of the most notable of the western tribes who inhabited the Great Plains, the open country lying west of the Mississippi River and east of the Rocky Mountains. They were famous among early travelers for chastity of their women and the courage of their warriors, in later years, when everything was in change, they were considered the most conservative of the Plains Indians. Their attitudes toward sex and war, and toward the maintenance of their social order are the outstanding features of their way of life.

Cutting across the kindred and bands are the sodalities, or clubs, of the warriors. While hunting is a male activity woven into interests of the family, fighting was an activity institutionalized in the organization of the military societies. The interests of these societies were tribal rather than kind based.

The five original military associations are the Fox, Elk, Shield, Dog, and Bow string. In the nineteenth century, after the annihilation of all the Bow string by the Pawnees in 1837, Owl Man started a new warriors club, the Wolf as the result of a vision experienced when starving and freezing on a journey north. The Northern Crazy Dog is the seventh club, a contrary association also patterned on the Bow string idea and undoubtedly influenced in part by the Crow Indian Crazy Dog Wishing to Die.

The warriors’ societies in Cheyennes are ungraded. This means that boys of a certain age do not join the lowest ranking club as a body and then progressively move up the ladder of clubs as they get older. When a Cheyenne boy is ready to go to war, he may join any club of his choosing; he may shift his membership later on, but it is most rare for him to do so. No one club is higher in status than another, although the popularity and prestige of the societies do shift from time to time. All the fraternitiesare fundamentally alike in their internal organization and activities; the differences are in their paraphernalia, dress, dances, and songs.

Each club has four officers or leaders. The leaders are the main war chiefs of the tribe, although any competent man may organize and lead a war party. The two head chiefs, who are the ritual leaders, sit at the back of the lodge when the club is meeting. The two other sit on their either side of the door and serve as messengers. These two are the bravest men in the society. They hold the post of honor at the door because when the camp is pitched tipi to tipi in expectation of an enemy attack, they hold the open gap in the circle against all assault.

Five of the seven associations also have four virgin daughters of tribal chiefs as maids of honor to participate in their ceremonies and to sit in the midst of the circle of war chiefs when they meet in common council. Select girls of the very best family who exemplify the Cheyenne ideal of the chastity and perfect conduct are thus held up for others to emulate. Womanhood, though it is denied direct access to power and authority, receives high deference and social reward. All the members of society call their four maids by the kin term sister, and they may never marry one of their own maidens. Should one of these girls defile her chastity before she marries, it will bring bad luck to the warriors of her club. The Dog and Contrary Soldiers claim that they do not have any maids of honor because they do not dare to run risk of the girls making a slip. Several of the auxiliary of the military societies have been noted. For instance, the great tribal ceremonies, the communal hunts, as well as such special activities as calling the buffalo and antelope.

Marriage, to the Cheyennes, is a formal and serious matter. The Cheyennes are sexually repressed, have very strict notions of proper conduct, and are most sensitive to what other members of the tribe think of them. Under such circumstances Cheyenne courting is a bashful and long, drawn out affair. It usually takes four or five years for a young man to win his bride, and when he is ready to put the question that is directed to her family, not to the girl. Good from requires that the young man not do the asking himself but rather send and old female or other relatives in his stead. After adolescence, boys and girls do not associate with each other, so there is no direct opportunity to develop camaraderie.

Once a boy has seen a girl whom he hopes to make his sweetheart, he approaches her furtively. He knows the path from her family lodge to the stream where she gets water or the grove where she gathers wood. Hopefully, he stands along the path. As she passes, he gives her robe a little tug. Perhaps he feels this too bold. If so, he whistles or calls to her. She may stonily ignore him, much to his mortification. Or she may take the stars shine by stopping to talk about this and that but never on love. If all goes well, they may begin to talk and meet outside her lodge. In time, they may exchange of rings that young people wear. They are then engaged. Except for the exchange of rings, a suitor rarely gives presents directly to a girl. When the time comes, these go to her male relatives.

In the days following, both mothers work at providing a new house hold. It is the girl’s mother‘s privilege a new tipi and its furnishing. Relatives from both sides help with many contributions. When all is ready, the lodge is set up, usually in the vicinity of the bride’s mother’s lodge. The couple then leave the husband’s tipi for their own.

As the individual family is a unit of organization within its kindred. The kindred is a unit organization within the band, or camp. Traditionally, each band has its designated location in the camp circle, but there is no perfect agreement among present day Cheyennes as to band location in the past. Cheyennes social organization goes trough a semiannual cycle, for it is impossible with their type of economy for the cheyennes to feed their total population during the fall, winter, and spring unless they disperse the tribe.

The core of a band consists of one or several closely related kindred, although some families not directly may choose to live with some particular band. There are ten main Cheyennes bands, as follows:

1. Eaters, osmosis. The Eaters say they got their name because their ancestors were such great hunters that they always had plenty of food. The eaters are the largest Cheyenne band  and live in the north.

2. Burnt Aorta, heviqsniphasis. This name is believed to have originated in a past emergency situation in which a roasted aorta from the heart of a buffalo was used as atobacco pipe. The women of this band have the habit of sitting with their feet to the left. All the other Cheyenne women sit with their feet on their right.

3. Hair Rope Men, Hevatanui. While other Cheyenne use rawhide ropes, this band customarily makes its rope of twisted hair.

4.Scabby, oivimana. Originally a kindred within the Hair Rope band, their headman, according to one account, developed a skin infection from using a mangy buffalo hide as a saddle blanket. Others in the family got the affliction from him.

5.Ridge Men, isiometanui. Another offshoot of the Hair Rope  Men, who developed a preference for living in the ridge country at the head of the Smoky River in Colorado.

6. Prognathous Jaws, oktouna. Distinguished by its practice of a dance, preliminary to going on the warpath, known as the Deer Dance.

8. Dog Men, hotamitanui. actually a military society, it become simultaneously a band when all the men of the Grey Hair, or Wrinkled Up, masikota, band joined the Dog society en masse. There is said to be a large proportion of grey haired children in this group.

9. Suhtai. The band derived from the Suhtai tribe that joined up with the Cheyenne late in eighteenth century.

10. Sioux eaters, wutapiu. The name of this band is the siouxan word for Eaters. It originates from in corporation of a Sioux group into the Cheyenne tribe at some time in the past.

Activities
Men and women cooperate to supply the food, but the division of labor is strict. Women are the vegetable gatherers. The dibble, or digging stick, is their basic tool. It was given by the Great Medicine Spirit and it figures in the ritual paraphernalia of the Sun Dance, for it has sacred aspects. Cheyenne dibbles are of two types. The short kind has a knob at one end and is pushed under the desired root by pressure against the stomach when the digger is down on both knees. The other kind is long, and used as a crowbar. The sharp ends are fire hardened

Women also go out in foraging groups to gathers wood for their fires. Expecting for collecting expeditions, however, most women work when the camp is not moving in and about the lodge preparing food, dressing hides, sewing and decorating clothing, robes, and lodge. In general, these women are cheerful, busy and skillful. The raising and lowering of tipis is solely the job of women, and they do it with skill.

While women gather vegetable foods, and make the home and its accouterments, men bring home the meat, make weapons, wage war, and perform the major part of the necessary rituals.

The Cheyenne men are almost exclusively big game hunters, even as the postlagical paleo Indians of the Plains. Bison stand out as their basic staple, with antelope next, then deer, elk, and wild sheep. Smaller game, such as wolves and foxes, are taken occasionally for their furs. Of their domesticated animals, the dog is a favorite delicacy reserved for feasts. Deer and Elk are taken by individual hunters who stalk them with bow and arrow, or ambush them from hiding places along their trails.