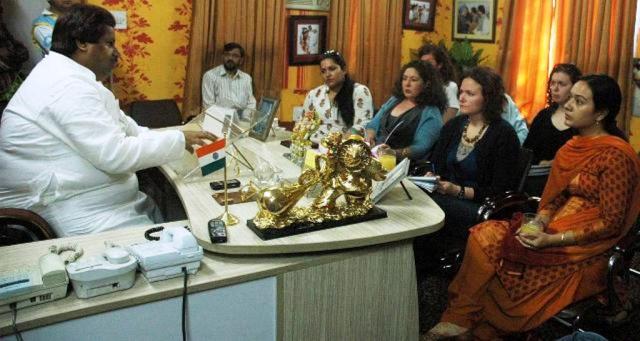 Jammu, March 20 (Scoop News) –    A Nine -member students delegation from Chicago University today met the Minister for Revenue, Relief and Rehabilitation and sought the information about the facilities being provided by the Government to Kashmiri migrants residing in various camps and Mini Township at Jagti in Nagrota.

Bhalla informed the delegation that for facilitating the return of willing migrants   to the valley, a comprehensive package of Rs. 1618.40 crore was announced by Prime Minister Dr. Manmohan Singh in 2008 for their proper rehabilitation in back in motherland.

For improving the living standard of Kashmiri migrants , the Minister said a mini township of 4218 flats spread over on an area of 100 acres costing Rs. 385 crore, is under implementation with facilities of hospital, schools, play fields, recreational parks and round-the-clock water and power supply. He said during the visit of Prime Minister at , the first phase of township having 2112 flats was handed over to displaced families adding that the left out 2112 flats would be allotted to the families after completion of allied works.

Bhalla said the Government has taken various revolutionary measures for effective implementation of PMRP package. He said as the situation is improving    in the valley  about 4624   migrant families have  applied   for return . He said 1906 candidates have already been selected for employment in different Government departments, out of which 1500 candidates have joined duty in the valley and are working peacefully   at their respective departments without any hindrances.

Another deputation of Baba Amarnathji and Budha Amarnath Yatri Niwas headed by  Surinder Mohan Aggarwal comprising its members met the Minister and projected charter of demands.

Bhalla gave patient hearing to them and assured their genuine demands would be mitigate on priority basis.

The Minister said Government is making all out efforts to provide all the wayside facilities to tourists and devotees of Shri Mata Vaishno Devi ji, Shri Amarnath Ji and Shri Budha Amarnath ji in the State.