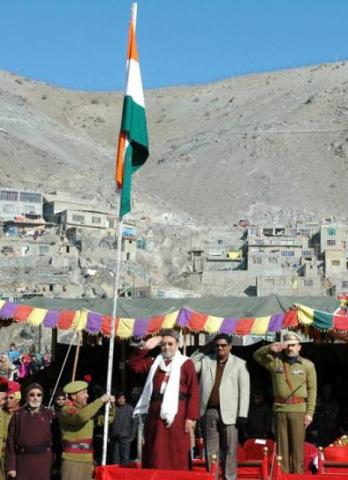 Speaking on the occasion the Chairman/Chief Executive Councillor LAHDC, Kargil, Kachoo Ahmad Ali Khan recalled the supreme sacrifices of the national heroes who laid down their lives for the sake of the country. He called upon the people to follow and uphold the age old tradition of brotherhood and communal harmony.

Presenting a brief review of the developmental activities, he said that 10 Solar Power Plants are nearing completion, while work is also being started on 10 mini hydel projects shortly from which 15 MW power generation is expected.

At all the district headquarters the march past was presented by contingents of JKP, JKAP, CRPF, NCC and school children. On the occasions, colourful cultural programmes were also presented.

The respective Deputy Commissioners, SPs and other senior Police and civil officer of the districts were present on the occasion.