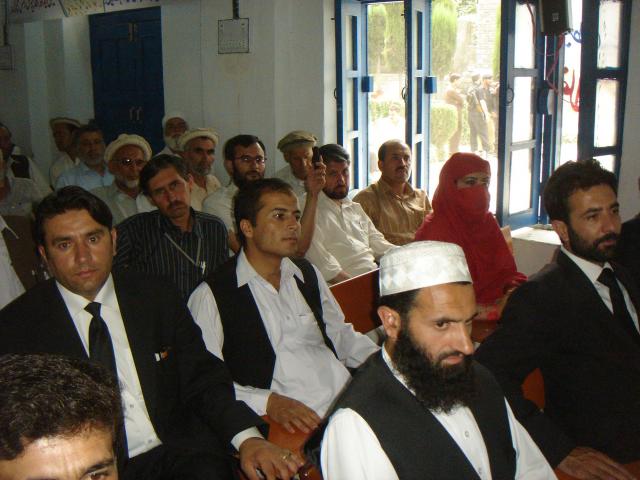 CHITRAL: Chief justice Peshawar High Court inaugurated High Court Circuit Court at Chitral. Chief Justice PHC Mr. Justice Dost Muhammad Khan was chief guest on the occasion who unveil plaque of high court circuit court. District and session Judge Syed Zamarrud Shah was also present on the occasion.  A simple but prompt function was also held in this connection in Commerce College Hall. Addressing on the occasion Chief Justice PHC Mr. Justice Dost Muhammad Khan said that Chitral is a remote district and I was very much shocked when Chitral people could not attend the Court due to heavy snowfall and blocking of roads or they reach their with great difficulties. Now after opening of Circuit court their problem will solve and their cases will trialed at their door step. He said that I will try of my best  to purchase own land to establish Circuit Bench permanently at Chitral. He said that Chitral is a very peaceful district but it was ignored in past and now I will call a high level meeting to solve maximum problems of Chitral. Earlier that president of District Bar Association Chitral Ghulam Hazrat thanked to Chief justice and strongly criticized elected representatives of Chitral who did nothing for establishment of circuit court or took any step for relief of people of Chitral. Chief Justice also administered sworn in oath taking ceremony from newly elected members of district bar association.
The chief Justice also inaugurated ground breaking ceremony of Judicial Complex at Jughoor. Talking to local elites of the area he said that this judicial complex will bring revolution in development of the area as well as solving of their problems. A cultural show of local and folk music was also held in honor of Chief Justice. Traditional gifts were presented to Chief guest on this occasion. A large number of people belonging to all walks of life were present on the occasion. it is worth to mention here that Chief Justice attended 6 cases under Trial as high Court Judge in Circuit court.
G.H. Farooqi C/O Manager bank Islami Main branch Chitral phone No 0943-320737, 0943-316052, 0943-414418  , 03025989602, 03337069572, 03159698446, 03469002167
email: gulhamad@gmail.com
Filed under: Politics, World
Share Tweet Pin G Plus Email
previous article: The squabbles of Robert Eringer
next article: Center for Productive Longevity Announces Speakers for Baby Boomers Entrepreneurship Meeting