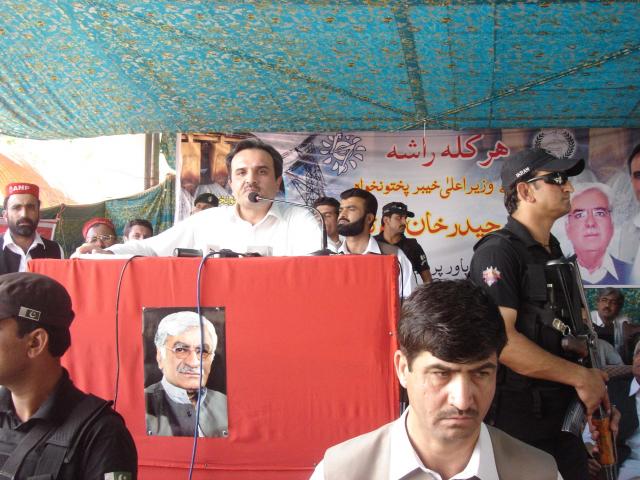 CHITRAL:  Chief Minister Khyber Pahton Khwa Amir Haider Khan Hoti visited Drosh Chitral some 45 KM from here and inaugurated 69 Megawatt Lawi hydro project. In this connection a ceremony was also held at Chitral Scouts helipad ground. Addressing on the occasion Chief minister said that Chitral have rich potential of hydro power and will launch 9 hydro projects in the area to overcome energy crises as well as to provide job opportunities to local and they will also get royalty of their water. He said that 240 million have allocated for completion of Abdul Wali Khan by pass road which will be completed at the end of this year. He also announced up-gradation of high school Arandu to higher secondary as well as two girls prmary schools were up=graded to middle level at Shahnigar and Kalkatak respectively.  He assured that ANP led government will launched developmental network at Chitral to raise life standard of local people. He also announced that during recruitment in these 9 hydro power projects local people will be given preference. He was left for Peshawar in helicopter on the same day. it is worth to mention here that Lawari Hydro power project will be completed with 12.36 billion fund and after completing the remaining 8 projects Chitral will be able to generate 1200 Megawatt of electricity.