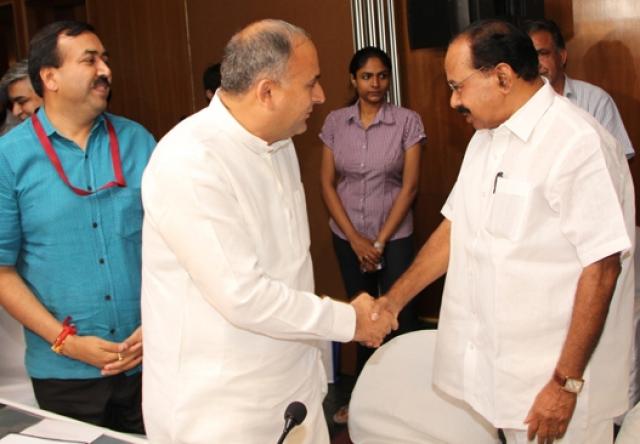 NEW DELHI/Srinagar,August 06(Scoop News) – Recognizing that Power is the prime mover of life, the Minister of State for Power, Shabir Ahmed Khan reaffirmed the commitment of J&K government to play its due role in meeting its own energy requirement and making substantial contribution to the National grid by harnessing its hydro and other renewable resources. It is imperative that availability of affordable and continuous supply of power keeps pace with the constantly increasing demand, he added.

Addressing Chief Ministers Power Conference held at New Delhi today under the chairmanship of Union Minister for Power, Veerapa Moily, in which the Minister was representing J&K government said that for strengthening of Intra-State Transmission & Distribution systems substantial achievements have been made through the Prime Minister’s Reconstruction flagship Programme by way of construction/augmentation of grid stations, construction of new transmission lines and thickening of conductor of existing lines in the State.

The Minister said that State government has initiated several initiatives for power Grid Defense planning and Special Protection schemes (SPS) are planned & implemented to prevent severe contingencies which can lead to wide spread interruptions and to limit their consequences. He said that these measures include planning new transmission system, SPS need to be reviewed and possibly modified whenever the system is changed, Off-line simulation has to be done followed by on-line SPS in future, Provision of under-frequency, under-voltage sensitive load management needs to be resorted;

He said that Reliability analysis and risk mapping & management (J&K state has concentrated power activity at Kishenpur with 400 KV line from Moga where reliability can get jeopardized. He said that State has requested CTU to connect Samba station with either Amritsar or Jallandhar and connect Kashmir valley through a 400 KV line through other more stable route (Mughal Road). He said that more than 48 hrs blackout was experienced in Kashmir valley on 6-7th Jan 2012 when various Gen stations could not be pooled and had to serve as smaller islands sub-optimally. He said that being conscious of grid related obligations, our state has very peculiar issues which includes spiraling cost of power and higher loss levels are compelling factors to reduce supply hours in normal times in the State.

Shabir said that State is extending Grid supplies to hitherto island areas of cold desert areas of Leh & Kargil where consumption is likely to increase on access to power. He said that most of the generation accrues from hydel stations He said that 723 MWs out of allocated power of 1264MWs comes from hydel stations and generation diminishes during winter when load of the state swells up. He said that either that the power curtailment hours are to be increased and anybody can guess public mode in chilling cold with longer power breaks.

The Minister said that MOP has to comfort the State by establishing a gas-based load station of at least 2000MWs. He said that since coal based station, announced earlier, has been shelved, MOP has to help the State in construction of a gas fired base-load station. He said that increase allocation of cheaper thermal power to the state (at least for lean river discharge winter days) He said that Central Transmission Utility has to come-up with more reliable transmission system for the State; map reliability indices, risk issues & workout mitigation.He said that MOP & the related agencies might have to handhold the State in DSM (demand side management) technique The Minister said that State Load Dispatch Centers (SLDC) operations & logistic maintenance is contracted out to PGCIL. He said that there is need to augment the competencies of the staffers. He said that SLDC staffers are sent to regular refresher programs, some have even been conducted out of country.

Shabir said that attempts are made to adhere to the disciplined grid obligations: which can be demonstrated by the facts that at the time of Grid collapse on 30-31st July J&K State was under-drawing; He said that State has been made some power available out of un-allocated quota and it has many a times been withdrawn in summer days without prior information which makes load scheduling difficult. He said that NRLDC would earlier upload online drawls & entitlements on its web-site (that utility management would watch it from any place & plan/order load scheduling) which it has abandoned for security reasons; but the result has been contrary.

The Minister said that restoration of grid after collapse has been undertaken by CTU. He said that State has flagged this issue far earlier at the start of the year, although in a different context. He said that State of J&K has been able to create two islands one at Jammu (pooling Salal, Dulhasti & Baglihar HEPs) and in Kashmir (pooling Uri-I,LJHP,UPS-II) earlier than charging of Moga-Kishenpor 400KV link, and had supplied essential loads in the State.

Shabir has expressed gratitude to Central government for providing financial assistance to the State government for developing power sector. He hoped that by the liberal and continuous support of Union Power Ministry under the dynamic leadership of Veerappa Moily Union Minister of Power the J&K State shall take long strides towards cherished objective of transforming from an energy deficient State to a energy surplus State.