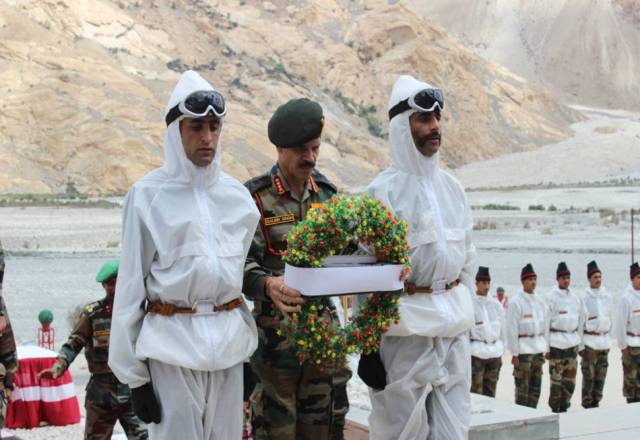 Chief of the army staff at Ladakh-Scoop News

This is his first visit to the region after taking over as Army Chief on July 31.

The Army Chief had a detailed interaction with the Army Commander Northern Command and General Officer Commanding 14 Corps on the prevailing security environment, infrastructure development projects and various initiatives undertaken by the Army in Ladakh Region.

He also reviewed the logistical infrastructure available to the soldiers, the official said.

Soon after his arrival, the official said, Army Chief visited the Siachen Glacier. He also paid tribute to the brave soldiers who had laid down their life in this sector by laying a floral wreath at the Siachen War Memorial.

In his address to the troops at the Siachen Base Camp, the Army Chief applauded the efforts put in by the brave soldiers of the Siachen Brigade.

The Army Chief will also visit forward posts of Eastern Ladakh and will review the Army’s defence preparedness in that sector.

The Army Chief will also receive the Prime Minister, Narendra Modi, who is scheduled to visit the region on Tuesday.