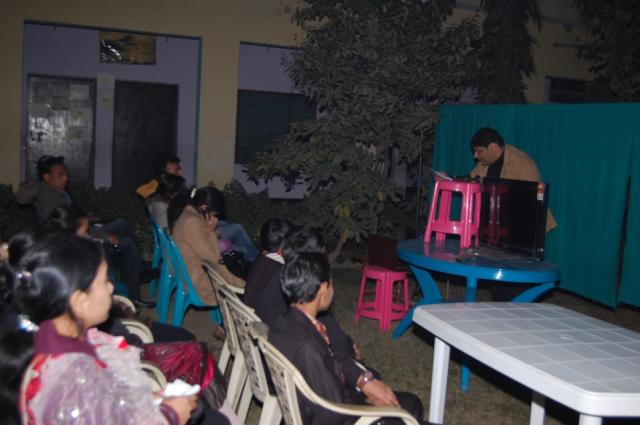 Making films on kids is a difficult job especially when it’s a message oriented  film and the kids have to perform no lesser than the adults. It’s a big challenge but Varun Mehta claims to have succeeded in this. His Film ‘The Wonder Stone’ that talks about an adventure of an alien stone with the Kids finally saw its premiere on 28th of December 2011.
The movie has already been in News by receiving honors at Children’s International Film Festival at Chennai followed by the Music Video ‘Evolution’ screened at Cristal Movie Awards at Switzerland. The film stars 6 ordinary school kids from Aligarh City and Varun leaves no stone turned to have the environment rustic and true to the environment of the city. One of the kids find the alien stone and it results in an explosion only to give him majestic superpowers but the changes that leads to the conclusion is another story.
When asked about the experience Varun replies – ‘It was a very very tough job…because it’s a one man’s show. I have worked on each and every frame of this movie from start to finish. It was really tiring but I am glad that I managed to complete it. I accept the flaws and I take the blame too. But In the end I know people will enjoy the film more.
But why only Children? The film could have been on a large level with adults, Varun replied –“‘Sure, but the innocence of kids can’t be portrayed by  adults. The emotions displayed by kids in this movie are far better than any senior artist and you will agree when you will watch the movie yourself’. Besides Children Movies are always safe routes to take. If you have made a good kiddo movie with a good story. Rarely people take the technical side for criticism.” The film shall be uploaded on YouTube on 31st of December 2011.
Filed under: Media & Tech, Music & Film
Share Tweet Pin G Plus Email
previous article: How Malaria Was Spread in South America?
next article: Iran tests Missile, despite being threat of Ban.