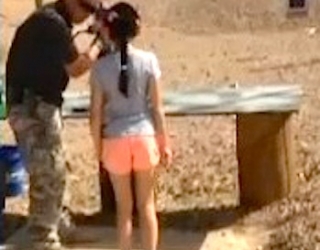 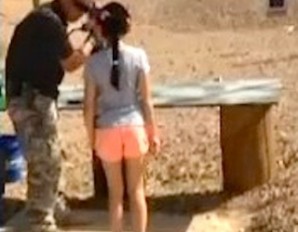 Shooting instructor Charles Vacca coaching a young child on shooting a fully automatic Uzi sub machine gun. The girl subsequently lost control of the weapon dropped it and bullets hit the instructor in the head. He died shortly thereafter. The little girl is traumatized forever, an entire nation shocked and and a family is “devastated” as a result of the incident — which was totally preventable had people exercised common sense and not let a child handle such a dangerous weapon in the first place.

I received a copy of the following correspondence from a Senate staffer dealing with a letter coauthored by Senator  Feinstein and Senator Boxer regarding the push for child safety at gun ranges resulting from a tragic shooting accident involving a child in Arizona on August 25, 2014:

We are sure that you were as horrified as we were to learn that, on August 25, a 9-year old girl accidentally shot and killed her firearms instructor when she lost control of a fully automatic Uzi submachine gun at a shooting range in Arizona. We are writing to ask that your organization take the lead in promoting policies at shooting ranges that will protect our children and your members’ employees.

Many owners and operators of shooting ranges share our view that not only was this tragedy avoidable, but that children should not be permitted to shoot a fully automatic weapon. We are encouraged that some states have already taken the initiative to protect our children. For example, Connecticut state law prohibits transferring, selling, or giving machine guns to minors under age 16, including temporarily transferring the weapon to them for use in target shooting or on a firing or shooting range.

To be clear, no shooting range needs to wait for the law to change to take action to protect children. Nothing prevents a shooting range from implementing appropriate age restrictions immediately.

We hope that you will lead an initiative to stop these tragedies in the future. Your leadership in asking your foundation members to support restrictions similar to Connecticut’s law and to voluntarily implement age restrictions at their shooting ranges would make a difference in creating safer environments at ranges. Will you urge shooting ranges that are members of your organization to prohibit children from firing fully automatic weapons? Please send your response to: Staff@Boxer.Senate.gov.

We will continue to work hard to protect our children and hope that you will join us in our efforts to implement safety measures at shooting ranges. We look forward to working with you in the coming months to achieve that goal.