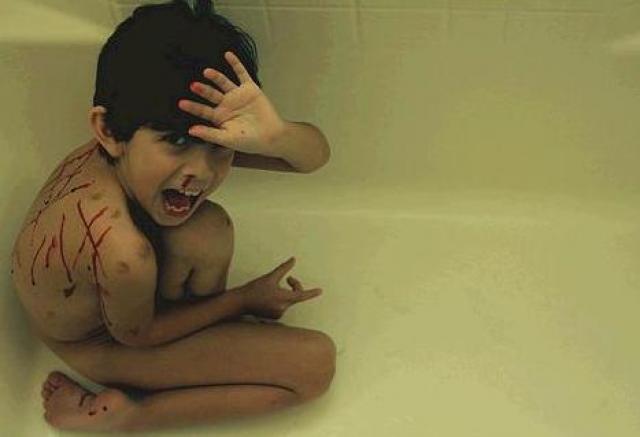 Are children safe in this world from atrocities? The answer is no. They are not safe from sexual abuse from their neighbors, teachers, and even from their guardians in some cases.

Recent shocking news stories have painted the stark picture of the children conditions. A villainous Josef Fritzl of kept his daughter hostage for 24 years in the basement of his house and fathered 7 children with her. It is one of the dreadful cases appeared in the newspapers in recent days. Traditionally, Indians believe that sexual abuse with the children is not our problem. These things exist in west but not in our country. This is a wrong notion altogether. This is because sex is considered a taboo in our society. Even in the families, it is not a worthy topic to be discussed among children. And we don’t know what is happening behind us with the children.

The atrocity against a daughter is also repeated in in a slightly different form. Kishor Chauhan, a business man was arrested in Mumbai for raping his own daughter for nine years.  He has been doing such a heinous crime when she was just 12 years old. His astrologer Hasmukh Rathod had suggested him to do so for getting richer quickly. The daughter opened her mouth when astrologer forced her younger sister also. The same kind of case appeared in the court few years back in which, a father was accused of raping her five teenaged daughters with the help of his multiple wives.

There are some incidents which have defeated even shame. A 2-year old girl was raped by her neigbour in one of the Mumbai suburban areas. In a similar case, a drunken father raped her four year old daughter in when no one was at home.  A 14 year old girl was raped and strangled to death by her home tutor in . Teacher lured his student and killed after raping at his residence. A step-father of two girls used to rape his daughters in the absence of the mother. And, who can forget the Nithari killings of children? Nithari case was one of the worst reported cases of child abuse. These are the few examples of reported cases in the media. There could be thousand unheard cases in the society. There is no end to such terrible cases in our country.

The definition given by Ministry of women and child welfare in a report, Sexual abuse is inappropriate sexual behaviour with a child. It includes fondling a child’s genitals, making the child fondle the adult’s genitals, intercourse, incest, rape, sodomy, exhibitionism and sexual exploitation. To be considered ‘child abuse’, these acts have to be committed by a person responsible for the care of a child (for example a baby-sitter, a parent, or a daycare provider), or related to the child. If a stranger commits these acts, it would be considered sexual assault and handled solely by the police and criminal courts.

According to the 2007 report on child abuse tells that more than 53% children are sexually abused. And more than 70% children did not report the incident to any one. Report also reveals that 50% of the abusers were known to the child.  Children are sexually abused by their neighbours, teachers, and relatives and now, even by parents in few cases. Where are children safe? These atrocities with the children are not limited to particular social strata of the society. It is happening in low, middle and high class society. Children are vulnerable everywhere. Children often remain silent because of fear. Even if he/she speaks then it is not taken seriously or ignored to avoid ‘bad name’ to the family and child.

If the parents are silent then who would speak for the poor child? This moral question can annoy and worry any civilized person. Parents, especially mother, can not be silent on the issue of child abuse unless she is remorseless and heartless. Parents must encourage the children to speak to them for anything, they feel uncomfortable. And, if child trusts the parents to share his/her problem then parents must help him/her by extending positive support.

According to a report prepared by NDTV team of doctors, in the case of child abuse the physical force is rarely necessary because children, who seek for love and approval from elders, believe that they are always right and thus become vulnerable at the hands of such people. Parents or guardians must be vigilant towards their children since there are certain general behaviour changes that may occur in children if they are experiencing such a problem.

The behavioural change may include sleep disturbances, withdrawal from usual activities, displaying sexual knowledge, unexplained pain, swelling, urinary infections and sexually transmitted diseases. An abused child may avoid to be left alone with a particular individual. A sexually abused child may feel different emotions like fear of the abuser or of being different; anger at other adults around her who did not protect her; isolation, sadness, guilt, confusion and shame.

Parents should be vigilant and must tell the child about the difference between the ‘safe touch’ and ‘unsafe touch’. If parents can teach them societal behaviour, manners and other necessary things so why not educate them about their safety. Individuals should also take initiative against child abuse. It does not matter that child is from your family or from your neigbour. It is the moral responsibility of every citizen to save the vulnerable children from the hands of perpetrators.

Government should also make a separate act to execute the convicts of child sexual abuse. In present context, child abuse cases are handled under various section of penal code which are meant for adults like Section 376, and 377. The Offences against Children Bill, 2005, is a good initiative by the government.  We should make all efforts to make the protective environment for the children. As the saying goes, children are the form of God on earth. So, it is the need of the hour to save the God on earth.

[Note: This article is not written to create unnecessary threat among the parents and guardians about the safety of their children. But this is to create awareness among parents to take better care of the children and save them from these heinous criminals around them in disguise of their closed relatives. The symptoms of the victim children have been taken from the authentic sources which are checked by professional doctors. Sometimes, these above symptoms could be because of other reasons also.]