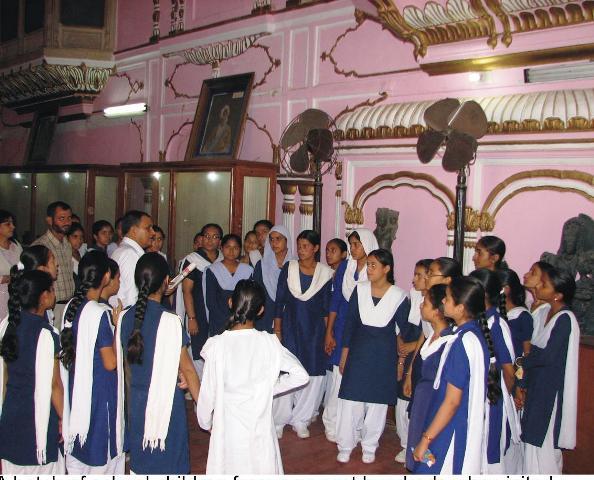 Srinagar/Jammu, May 18 (Scoop News) – On International Museum Day (IMD) today, hundreds of school going children wearing school uniforms visited the two museums in Srinagar and Jammu to have a date with the rich heritage on display.

The Department of Archives, Archaeology & Museums had made special arrangements for free entry and guided tour of , and , for school children to create awareness about and interest in museums and the glorious heritage of Jammu & Kashmir preserved there.

Throughout the day, several hundred school children, most of whom the first time, came to the two museums and were thrilled to see the displayed objects carrying rich history about them. The Curators and the staff of the two museums conducted the batches of students through various galleries and introduced them to each displayed object of archaeology, paintings, decorative art, textiles, arms and armoury, anthropology, numismatics, manuscripts, and natural history. The children evinced keen interest in the objects and were very inquisitive.

At SPS Museum, Srinagar, sitting on the left bank of the fabled River Jhelum, the largest batch of 257 girl students of Arya Samaj School, Hazuri Bagh was the first to arrive when the gates of the museum were opened for the day at 10 A.M. They were accompanied by their teachers. Director Archives, Archaeology & Museums, Khalid Bashir Ahmad received them at the museum. Deputy Directors, M. S. Zahid, Peerzada Muhammad Ashraf and Curator, Mushtaq Ahmad Baig were also present.

Khalid said that free entry to school children on International Museum Day and arranging a guided tour of the museums for them was to generate interest among the young generation in the great and unrivalled heritage that Jammu & Kashmir possessed. He said the observance of the IMD on April 18th provided occasion for the museum professionals to sensitize people about the importance of safeguarding heritage. He said the overwhelming interest shown by young students today was an encouraging sight and could auger well for the protection and preservation of the State’s glorious heritage. On this occasion, the children said they were benefited by the visit and were educated about the wealthy heritage and culture of their State.

The is one of the richest museums of the country in terms of its collection, especially in archaeology, numismatics and textiles. The archaeological objects date as back as to 3rd-4th century AD while in numismatic section the oldest collection, Punchmark coin, dates back to 500 BC. A new Rs. 30. 74 cr multi storey museum complex, adjacent to the old building, where the precious heritage would be housed on scientific lines is nearly complete. The has a rich manuscript collection in the shape of Shahnama and Punj Ganj Nizami (illustrated) of Mughal period and Ramayana in Persian script.

At , students from , Mubarak Mandi, JK Public School, Panjtirthi, , Panjtirthi, , Kachi Chhawni and , Rehari were among several students of educational institutions who visited the today.