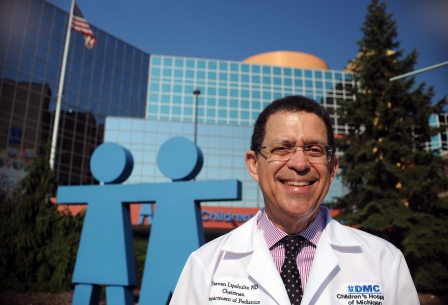 Published in the upcoming March 10, 2016 issue of the authoritative Journal of Clinical Oncology, this new study is likely to change the standard of cardiac care during treatment of many childhood cancer patients. 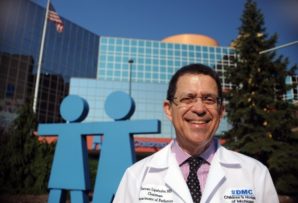 After more than two decades of grueling research on a National Institutes of Health study, Children’s Hospital of Michigan Pediatrician-in-Chief and Chair of the Wayne State University School of Medicine Department of Pediatrics Steven E. Lipshultz, M.D. and a group of pioneering Detroit researchers have co-published a study that breaks new ground in the effort to protect children who survive two major types of blood cancer from the threat of lifelong damage to their hearts caused by chemotherapy.

Published in the Journal of Clinical Oncology, the clinical trial found that dexrazoxane is effective in neutralizing the toxic cardiac effects of the often used pediatric cancer-fighting drug doxorubicin. Childhood cancer patients involved in the study were all survivors of newly diagnosed (and often fatal) T-cell acute lymphoblastic leukemia or advanced-stage lymphoblastic non-Hodgkin lymphoma.

“This is the largest dexrazoxane study ever done in children, involving nearly 600 patients who were followed for many years after receiving doxorubicin during their cancer chemotherapy,” Dr. Lipshultz said. “The results are very encouraging,” he added, “because they show that the kids who received the dexrazoxane after doxorubicin therapy for their cancer had hearts that were normal – and the children who didn’t receive dexrazoxane had significantly abnormal hearts. The publication of this study in the Journal of Clinical Oncology says a great deal about the major contributions to clinical research that are being made at the Children’s Hospital of Michigan.”

The study concluded that, “Dexrazoxane was cardioprotective and did not compromise antitumor efficacy, did not increase the frequencies of toxicities, and was not associated with a significant increase in second malignancies with this doxorubicin-containing chemotherapy regimen. …We recommend dexrazoxane as a cardioprotectant for children and adolescents who have malignancies treated with anthracyclines including doxorubicin.”

That finding was underlined by Eric J. Chow, M.D., a pediatric oncologist at Seattle (Wash.) Children’s Hospital, who said in a podcast appended to the study: “In summary, [this] study adds to the growing evidence that dexrazoxane may have an important role in ameliorating important cardiac late effects in childhood cancer survivors.”

Dr. Lipshultz, the senior author of the new study – funded in part by the National Cancer Institute and which included research by members of the national Children’s Oncology Group – first began conducting research on dexrazoxane as a potential “cardioprotectant” for children undergoing chemotherapy for leukemia in the late 1980s.

“It was very heartening,” he said, “to see that a leading cancer journal not only accepted the study for publication . . . but that they also put it on the fast track to come out immediately [online], because they felt that it could potentially influence the standard of care for pediatric cancer patients who receive chemotherapy.”

“This very large study took many years of collaborative effort by a remarkable group of extremely dedicated pediatric oncology and cardiology researchers,” Dr. Lipshultz said, “and I think it’s a powerful example of how good clinical research at the bedside can help investigators to find ‘patient safety signals’ and then join together to study and prevent them. When that happens, the result is often improved pediatric patient care – which is our bottom-line goal at the Children’s Hospital of Michigan, day in and day out.”

Children’s Hospital of Michigan Chief Executive Officer Larry M. Gold echoed Dr. Lipshultz’s assessment of the study by noting that “pioneering research of the kind Dr. Lipshultz and his team just published in the Journal of Clinical Oncology is a crucially important part of the Children’s Hospital of Michigan mission. I think we can all take great encouragement from the fact that this breakthrough came about as the result of vigilant patient care by clinicians who were determined to improve outcomes by asking the right questions and then working very hard to come up with the right answers.”

Filed under: Healthcare, News
Share Tweet Pin G Plus Email
previous article: Know What March 8 Is? Here’s Why You Should
next article: 4 Reasons Content Marketing is Vital for Your Small Business