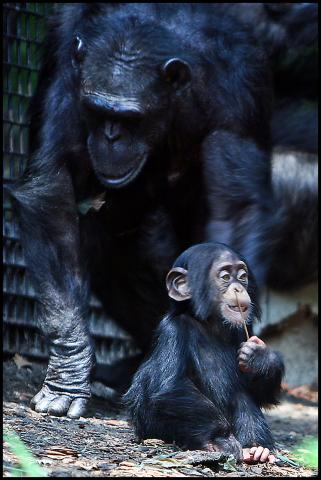 A man in the remote town of Cle Elum, Wash., used an article in Discover magazine as inspiration for his new life’s work: Chimpanzee Sanctuary Northwest. After learning that many chimps used in medical experiments were forced to live out the rest of their lives in cages, Keith La Chappelle put $200,000 of his own money, in addition to $80,000 in donations, toward construction of the chimp house.

The Humane Society of the United States reports that there are 1,200 chimps residing in research labs; releasing the chimps into the wild after they’ve been used for research purposes “isn’t considered an option, since lab chimps wouldn’t know how to find food or avoid predators,” reports the Seattle Times.

Other animal activists have created safe havens for chimps. For example, anthropologist Carol Noon heads a 200-acre chimpanzee refuge in Florida. The facility is privately funded, and has “12 separate islands where chimps have access to indoor and outdoor enclosures,” according to the blogPrimatology.net. In March 2007, there were 99 chimps at Noon’s facility, “Save the Chimps.”

But do chimps really appreciate the havens, or are the facilities merely vanity projects for self-important animal rights activists?

An October 2007 article in the Los Angeles Times discussed a study suggesting that the ability to judge fairness was a trait unique to humans, and not evident in chimps. In a food-sharing experiment, “chimps tended to accept any offer and didn’t get upset when they were offered a small amount of raisins or none at all.”

Others disagree, however. In June 2008, Spain granted legal rights to apes. The so-called Great Apes Project was designed by scientists and philosophers to protect the animals from harm, and is “thought to be the first time a national legislature has granted such rights to animals,” according to the Times of London.

Furthermore, in August 2005, Live Science reported on a study by researchers at Emory University showing that chimpanzees displayed social conformity. Previously, there had been no evidence that “any animals other than humans felt the pressures of social conformity.”