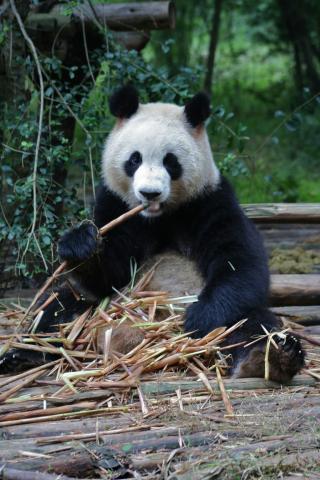 The first live birth of panda through artificial insemination was announced on Friday at Wolong Giant Panda Research Center, China’s Sichuan province.
This is the third baby for the panda mother You You and the first successful case in the world to use frozen sperm for a birth. The gender of the cab is not clear yet so it hasn’t been named.

You You was found pregnant in June after being given the insemination in March. The sperm, which had been deeply frozen in liquid nitrogen for a few years, was from Lu Lu.

"We did try before but it failded," Huang Yan, a researcher of the center told AP.

He said the viability of frozen sperm is usually 20 to 30 percent but this time they managed to raise it to 70 percent, which is the key for success. He didn’t disclose more details of the technique.

Panda females are infamous for their weak fertility as their annual ovulation period is as short as three days, which is the major reason why the species is endangered. It’s a challenge for all panda raisers to ensure male and female panders are able to mate during the three days.

If the technology can be replicated, the ideal situation would be "to get semen from every male in captivity and freeze the sperm," said Dr.Barbara Durrant , a reproductive physiologist at San Diego Zoo, adding that exchanging frozen sperms between zoos is definitely a plan as pandas no longer need to travel around the world to mate.