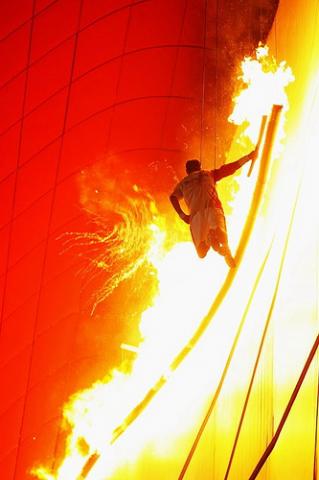 Faked, harmonized, prettified, just when everyone seems so into the Games, out comes the news that two of the highlights of the opening ceremony were not what they appeared: production of a made-for-tv version of the footstep fireworks that walked across the sky from Tiananmen Square to the Bird’s Nest began a year ago, and nine year-old Lin Miaoke, de facto face of the event for many, was actually lip synching to the voice of seven year-old Yang Peiyi, harmonized out of the picture because she doesn’t look perfect enough. There was some humor to be found in this; people asked, ‘they blew so much money on this thing and we couldn’t even get a real one?’

For the faked footstep fireworks, the argument that there wasn’t much difference between what was seen from the ground and what was seen on television has made it less of a controversy, that and probably the fact that most bloggers are used to digital touch-ups of official events.

Looking at the early buzz on Twitter, though, we feel a sense of shame at seeing authorities muck it up not once but twice, and then wondering what the next fake revelation will be.

"Motherfucker, this “Ode to the Motherland” thing has already gone way beyond just lip-synching; putting in a stand-in singer is no fracking different from having a stand-in test-taker, and this is a huge misguidance to the youth of China. Zhang Yimou, you get your butt out here and apologize!"

"Through his actions, Zhang Yimou has effectively told all the impressionable minors and children of China that for “harmony”, for “odes to the motherland”, children can be made to deceive!"

"Zhang Yimou, too, is putting out word that if someone isn’t good-looking, no matter how good a singer they are, they can’t be allowed on stage. Yeah, fuck you. As director, do you not have any idea how influential the opening ceremony is? Do you not know that you’re twisting the minds of an entire generation of people?"
News of the lip-synching where reported was (at least in many places) quickly deleted, but discussion continued elsewhere; also on Twitter, Chinese wikipedian @shizhao tweeted in response to @buchimifan (‘Chen Qigang reveals, the main reason Yang Peiyi was taken out was in consideration of the image presented to the rest of the world, and national interest’) and @kcome (‘fuck the image presented to the rest of the world, and fuck national interest! Denigrate kids like this and our heaven-sent hypocrisy will just flow from one generation to the next!’):

"Well if that’s the case, when boxing king Muhammad Ali came shaking to light the torch at the Atlanta Olympics, wouldn’t that have been the ultimate loss of face for the Americans?"
Blogger/businessman Isaac Mao has collected a few other posts, one of which from Sina blogger ‘nice book on a summer night’ asks:

"Both of these kids are outstanding, but I think both of them will be hurt as a result of this~ Aye, this whole thing was done too…even if one of them didn’t have a perfect child’s voice, or if one wasn’t shockingly pretty, we’d have been able to accept it…

But now, never mind that we can’t accept this, do you think that the kids can stand it?

Adults made the decision, but they have to deal with the consequences, which are unfair to these two little girls~

Sometimes, things like the bottom line and principles are more important than national interest; at least they would be if those were my kids."

"So, is there anything that is still real? Gold medals?"
Perpetually blocked Blogspot blogger Nick Wong also writes:

"The news came out today that that little girl who sang (”Ode to the motherland”) and moved so many people to tears it turns out was playing “shuanghuang” and lip-synching, and the other story being that the “footprint” fireworks that everyone can’t stop talking about were pre-recorded, and not broadcast live, it’s really a scandal. I didn’t think that either of these were worth getting excited over (actually, I thought they were disgusting), so of course I wasn’t put out at all when I heard the news. Chinese love face by nature, they’ve been ambitious for big successes since ancient times, tending towards deception, this is nothing new, it’s just that even naive little girls have to put up with this kind of abusive upbringing from when they’re small, it really just makes you sigh."
Filed under: Media & Tech, Sports
Share Tweet Pin G Plus Email
previous article: The Scarlet Project Posts Nudes of Paul Donahoe & Kenny Jordan; Duo Gets Kicked off Team
next article: Raymond Daniel Thurmond Arrested for Holding Family Captive